Another Swiss tower crane fell over this past week. 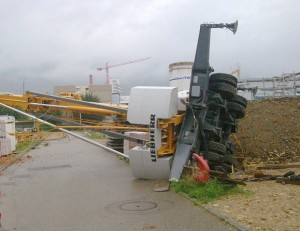 Another self erecting tower crane went over this week in Switzerland, no one was injured in either case.

Two cranes tipping in two days in Switzerland! Something strange must be going on?

Given the sudden (and short) storms that blew up on both sides of the Alps this week, maybe strong winds contributed to the felling of two self erecting tower cranes?

However in this case poor set-up was clearly a factor, regardless of any storms, the owner of this crane, which tipped over on a site in Bellach, near Solothurn, is reported to have blamed it on heavy rains undermining the ground under the crane.

As with the other incident, no one was hurt when the crane went over.