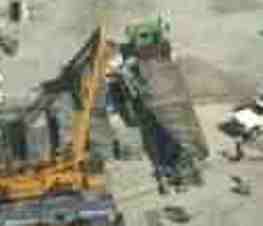 A mobile crane tipped over at a ConocoPhillips site in Hartford, Illinois on Thursday injuring the operator. The crane a Grove YardBoss YB7725 was said to be lifting pipes onto a trailer when it tipped. However photos from the scene suggest show that it was working alongside a large crawler crane. The crane, was working in the Lay Down yard and had its outriggers down but not extended, yet it was working with most of its boom out. It tipped over onto the side of the cab and reports say that the operator’s foot was trapped between the crane and the ground, he was taken to hospital by helicopter.