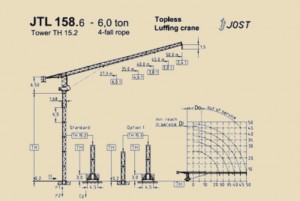 Following the January jib collapse on a Jost JTL 158 tower crane in the UK, the manufacturer told IC that it is investigating the cause and will produce a report containing its findings.

Jost JTL 158.6 topless (flat top) luffing jib tower cranes in London have suffered jib failures during high winds on four occasions in the last nine months. Another, in Essex, outside London, similarly failed in December 2011. All had the same point of failure in the jib structure.

An initial finding reported by Jost Cranes in Germany is that when the failures occurred all the cranes had their slew brakes on and were unable to weather vane during the extreme stormy weather where winds exceeded 160 km/h. “We know that the slewing brake was locked,” Jost said.

Regarding the design of the 6 tonne capacity crane, Jost commented, “All the structural calculations are good. We have enough safety factor in the jib if the crane is operated correctly.” Jost also said that all crane operators must be briefed on how to weather vane tower cranes correctly to avoid similar incidents in future, regardless of the make or model of crane. When tower cranes are left out of service they should be left to free-slew or weather-vane, instead of the slewing drive being locked.

In addition, the company is working to design and develop a safety mechanism to reduce the possibility of negative impact as a result of human error in tower crane operation. This would likely be an automatic interlock type solution preventing the crane from being left with the slew brake locked. “We want to see this implemented on all tower cranes of all types from all manufacturers,” Jost told IC.

There are well over 100 Jost topless luffing jib tower cranes currently erected in the UK, Jost said. Over the last 10 years, 20 % of crane collapses across Europe have been linked to high winds and cranes not being properly left out of service and free to weather vane, the crane manufacturer continued.

IC will publish details of report findings into these incidents when they are available.