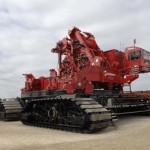 Saturday 19 September saw the Manitowoc Model 31000 heavy lift crawler crane unveiled in the iron. The 2,535 US ton (2,300 tonne) capacity giant was first shown at the factory in Manitowoc, USA to a group of SC&RA members as part of the 2009 Crane & Rigging Workshop in Milwaukee.

The Model 31000, announced in the March 2008 issue of IC, has a maximum load moment rating of 34,800 tonne-metres. It is targeted to meet demand for larger cranes worldwide to erect bigger refinery vessels and other components.

Testing of the crane will continue for more than 12 months. Bulldog Erectors will have the first unit in the field and Crane Rental Corporation the second. Both companies are based in the USA.

Another Manitowoc crawler on show at the event was a 600 tonne capacity Model 18000. A 300 tonne capacity Model 2250 carried the hook block from the 31000. Visitors also saw Grove rough terrain, all terrain and truck cranes and a Potain self erecting tower crane on a wheeled base. A factory tour was also part of the event and later in the day it was open to employees and their families.