At the Pacific Container Terminal in Long Beach, Calif., port cranes lift boxcar-sized containers, arranging them neatly on trains, trucks, and the decks of ships. If the cranes are not working, the whole ballet shudders to a halt.

For years, SSA Marine’s 10 cranes, each capable of lifting 50 tons, were plagued with chronic bearing damage. To overcome this challenge, Reed Electric & Field Service, a Los Angeles motor repair plant, began testing different replacement bearing solutions. Preventing damage Each crane has two 650-hp, constant-torque motors, which control lifting and lowering. Early on, Reed replaced the bearings and installed grounding brushes on the first few crane motors to fail. Yet, after one or two months of use, the bearings would emit a noise that signaled impending failure.

Replacing an 8-ton motor with a spare motor is no simple task, and puts the crane out of commission for 16 to 18 hours each time. Damaged motors were usually trucked to Reed Electric’s plant for repair. It was an inefficient solution to a baffling problem.

“You have no idea how frustrating it was,” says Robert Martinez, field service manager for Reed Electric. “We could hear those bearings growling, and we were trying to figure out how to solve the problem.” Large DC motors, especially those with shaft diameters of more than 2 in. (50mm), are likely to have high-frequency circulating shaft currents that result in EDM-type discharges through bearings. Martinez and his crew determined that the bearings (balls and races) were being pitted by these currents, and they had hoped adding grounding brushes would divert them. But this was a severe case, and conventional grounding brushes were not enough for these big motors. Without effective, long term bearing protection, concentrated pitting at regular intervals along a race wall can cause washboard-like ridges called fluting—a source of noise and vibration that eventually results in motor failure.

Reed experimented with insulated bearings on the outboard end of a motor. This worked for the outboard end, but blocked by insulation, the shaft currents followed the path of least resistance, shifting the damage to the bearings on the inboard end.  Specialists from Midpoint Bearing, the distributor from which Reed Electric purchases bearings, came to the terminal to evaluate the problem with Martinez and other Reed experts.

The consensus was to try an AEGIS shaft grounding ring on the inboard end of one motor. After consulting with the manufacturer, they determined that the best ring for such a large motor would be the Aegis iPRO.  Specially designed for high-current applications, the iPRO is ideal for protecting medium-voltage motors, generators, and turbines against electrical bearing damage. It improves the reliability of systems by safely channeling harmful electrical currents away from bearings to ground. 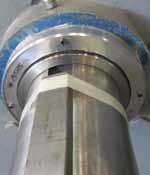 Problem free for months In early 2012, Reed Electric installed the first iPRO ring on the inboard end of a crane motor. Because the shaft had a long key-way, the shop fashioned a special collar to provide a smooth surface and sufficient contact for the ring’s fibers. This also allowed for the installation of a larger ring, capable of handling higher currents. Following Aegis’ best practices, the crew installed insulated bearings on the opposite end of the motor.

The motor was put back into service, and after two months, it was still problem-free. By Aug. 1, Reed Electric had overhauled five more motors in the same manner, which is now standard procedure. Skeptical at first, Martinez is now a believer in the iPRO. “We used to pull the motors out every one or two months,” he says. “To date, we have installed the Aegis ring on six motors, and we haven’t had a single problem with any of them since. We’re going to keep using the iPRO because it is working. It’s really doing the trick.”

Martinez can only estimate the savings that SSA Marine will reap in the long run from the new overhaul procedure. “When you consider all the labor hours required to keep pulling those motors and reinstalling them over and over again, and the costs of bearings and downtime,” he observes, “the savings have to be huge.”

SSA Marine wants Reed Electric to give the remaining 14 crane motors the same treatment when their bearings are next replaced. And word of the company’s success prompted the owner of several cranes at another California facility to contact Reed in the hope that they can help it break the vicious cycle of bearing damage.