There has been much discussion about the new rule governing the way cranes are operated in the USA and, in particular, the effect it might have on how crane operators are certified. Graham Brent, executive director of the National Commission for the Certification of Crane Operators (NCCCO), which has been in the forefront of discussions with the industry and regulators, outlines the issues…

Development of the most important crane rule in the United States in a generation has been well documented. At the invitation of the Federal Occupational Safety and Health Administration (OSHA), 23 representatives of the industries that use cranes, plus manufacturers and insurers, met almost monthly over a year beginning in 2003. They were tasked with overhauling the regulations that govern the way cranes are used in the USA. This Cranes and Derricks Advisory Committee (C-DAC), is generally considered to have done an outstanding job in fulfilling its task, delivering its final revision to OSHA in 2004. In October 2010, after a tortuous route through legal and budgetary review, public hearings and industry comment, an amended document emerged as a final OSHA rule.

Given that at least preliminary versions of the rule had been publicly available for several years why, one might ask, has there been such a fuss recently about some of its implications, particularly those that affect crane operator certification? One answer is in concern expressed by industry whether the OSHA administration is respecting the intent of the C-DAC industry experts that wrote the original document on which the requirements are based. Take, for example, the issue of the requirement to certify operators “by capacity and type.” This provision was included in the document delivered to OSHA by the C-DAC committee. In the final rule, however, OSHA added two more references to certifying by capacity and it gained a prominence and an interpretation that C-DAC never intended it to have. The industry missed the regulatory and legal impact of these OSHA additions when the final rule was published in October 2010. It is now struggling to make its concerns understood by OSHA’s Directorate of Construction.

The central issue for certifying bodies like NCCCO is, do they ignore the intent of the C-DAC committee who were asked by OSHA to write the rule, or do they just blindly follow OSHA’s own understanding of the way cranes work, and jeopardize safety? For NCCCO the matter is pretty clear: CCO certification has always taken crane type into account and always will. Capacity is a different issue. In theory, NCCCO could test by capacity; in fact, for many years CCO certification had two capacity “bands” in the telescopic boom certification, with the threshold at 17.5 tons. This was based on the fact that, at the time this programme was developed, cranes above this capacity generally had swing cab controls. It is the distinction between swing and fixed cab controls that the crane experts wanted to make, based on their determination that fixed cab cranes required different operating skills. It has always been about control type, not capacity and so, to avoid confusion, NCCCO changed the capacity-based classification several years ago to one based on a fixed or swing distinction. 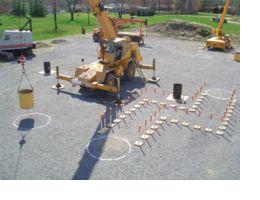 The question has been asked, “If it’s technically possible to test by capacity as well as by type, why don’t all certification bodies do that?” The answer is simple: The industry – as represented by manufacturers, insurance companies and, most importantly, crane users – has made it clear that this is not what C-DAC intended, that it is not what they want and, that testing in this manner could make crane operations less safe. Certifying bodies need to understand that they are service organizations, and are in no position to dictate to the industry what they should have in the way of certification. Until this matter is resolved with OSHA – which incidentally recognizes it does not have the crane expertise the industry does – NCCCO, for its part, does not intend to make any changes to CCO certification programme.

A potentially far bigger issue than the requirement to certify by crane capacity and type is OSHA’s contention that “certification” is directly equivalent to “qualification”. The new rule states that an employee who is certified is “deemed qualified”. Apparently, OSHA believes that the only thing an employer has to do to meet the crane operator qualification requirements of the new rule is to have his operators certified. This notion is entirely OSHA’s creation. This was never the intent of C-DAC and, in the words of one former member, rather than updating a 40-year old rule “this could have the effect of setting us back 40 years” by introducing a process that is actually less safe than current practice.

The problem is that certification has never been regarded by the certification bodies in this manner. NCCCO has always said that certification is a component of qualification, not qualification in and of itself – a “tool in the toolbox” of qualification. The variety and complexity of cranes prohibits, as a practical matter, a crane operator being certified on every type, size, and make of crane with all of its available attachments, in all of its possible configurations, in all the construction environments it might work. That is why certification is akin to a driver’s license where the basics of operation have been tested at an introductory level and upon which, over time, a card-holder builds experience with different equipment and applications. In this way a sound safety record is established. To rely on certification alone effectively undermines C-DAC’s attempts to make the workplace safer through more prescriptive operator qualifications.

Another concern being expressed by industry is the possible disenfranchisement of existing certificants. OSHA has stated that anyone not certified to the new rule on 11 November 2014 will not be considered certified. This would include two groups: (i) those who were certified prior to the rule being published in August 2010 and who still have some time left on their re-certification; and (ii) anyone who has been certified during the four-year period whose certification has been impacted by interpretations issued by OSHA. This would also be unfair to employers who took steps to have their operators certified before it was required.

As one owner of a medium size crane rental company put it, “Why would OSHA penalize us for trying to be safer? I thought that’s what OSHA was set up to do, promoting safety not discouraging it.” OSHA’s position on this issue is hard to understand given that all the certifications issued during this time came from certification bodies that OSHA had officially recognized, a recognition that employers and operators reasonably relied upon.

A simple solution to this issue is available to OSHA: accept the process of recertification and let it do what it is designed to do: test a certificant on any changes to the prevailing rules and standards as his or her certification comes around for renewal on its regular five-year cycle. Hopefully, the American National Standards Institute (ANSI) and the National Commission for Certifying Agencies (NCCA) on which OSHA relies to provide the required accreditation of certification bodies, will be able to convince OSHA that this is how professional certification is designed to function. Mass retesting of certificants every time a rule is changed or a procedure is amended would not work in any profession and it is counterproductive. Contrary to what OSHA personnel have stated on several occasions, recertification is not the same as grandfathering (where existing operators would never have to test) nor is it “kicking the can down the road” as recertification has also been characterized by the agency. It is a time-proven and psycho metrically sound method of progressively bringing all certificants up to the same standards by a “date certain.”

One thing, however, is not in doubt: It is neither in OSHA’s best interests, nor those of the certifying bodies, that any crane operators are disenfranchised at 10 November 2014 when the operator certification provisions come into effect. More importantly, it is not in the interests of the industry for – and by – this rule was written. For its part, NCCCO will stand resolutely behind the 130,000 accredited certifications it has issued over the last 17 years, as well as the hundreds it continues to issue every month.

No matter what the outcome, it is critical that every crane operator holding a current certification card – including the 30,000 that have already chosen to re-certify – will still have a valid certification when compliance begins to be enforced in a little over 18 months. As Thom Sicklesteel, NCCCO president, commented recently, “We have come too far, and all devoted too much time, energy and expertise, for anything less to be acceptable.”