On Monday this week a relatively simple lift went expensively wrong, thanks to a contractor using a smaller crane than the job demanded.

The project involved the installation of a steel foot and cycle bridge weighing around 40 tonnes that will connect the two communities of Hunter Crescent and Lisanelly in Omagh, Northern Ireland.

The project, part of a new Riverside Walk, is costing around £900,000 and is financed by the local council, the department for social development and transport charity Sustrans.

We know that one of the contractors, McLaughlin & Harvey or bridge builder M.Hassons & Sons, approached a number of crane rental companies to carry out the lift, at least one of which recommended that a single 500 tonne crane be used, complete with spreader beams to ensure that the lightweight bridge structure was not subjected to excessive compression stresses during the lift.

However it was decided to carry out a tandem lift instead, using a 350 tonne crane together with a smaller telescopic on the opposite bank.

The bridge was slung with four legs of the chainset attached to the lower chords of the bridge deck. The plan was to lift it just across the river with the 350 tonne crane, then set it down or ‘rest it’ on the concrete support, re-rig it for a tandem lift, by connecting up the smaller crane and then re-jigging the larger crane’s slings so that the two cranes could then lift it into its final position.

Well needless to say all did not go according to plan, the major concerns about keeping the bridge stable while it was re-rigged, or keeping the distribution of the load balanced accurately between the two cranes etc… were not the problem in this case. No it was the rigging of the load that did it, as the bridge was placed onto its mid-lift resting place it buckled horribly. To the point where it could well be a complete ‘write-off’?

The lift had to be abandoned and the bridge returned to its starting point – discussions have already begun about whose fault it is, and surely a good deal of this debate will centre on whether it was a regular crane hire or a contract lift? One thing that seems certain is that those financing it say they will not pay.

A statement from the council said: “Council officials have received an initial briefing from the contractor and have requested a report by the end of the week identifying what happened and outlining the actions proposed to complete the installation of the Bridge. Work on the remaining element of the project is unaffected and it is currently anticipated that the project will be completed on programme.”

One has to wonder how after all the debates about safety and warnings issued about the risks of tandem lifting, and the need to for proper planning and the use of a hierarchy system of risk assessment a government funded project ignored the lot? On top of this both the bridge builder and contractor make a big deal about safety and are certified as complant to OHSAS 18001.

We know that at least one 500 tonner was available in Ireland on the day of the lift and not working, the contractors were aware that there were several companies in the country that could carry out the lift using a single crane and yet…..whomever was involved in the planning of the project chose to use a method that screamed risk… a tandem lift over a waterway, that involved re-rigging the load halfway through the lift, that entailed men walking across the ‘balanced’ bridge to carry out that rigging surely someone should have said “hang isn’t there an easier way to do this?”

Why is it that good companies that take so much time to put safety statements in place and obtain all the right acreditations ignore it all when it comes to renting a crane?

Well the end result is thankfully not an injury, or pollution of the river from a submerged crane, but just a destroyed bridge that someone will have to pay for. I wonder who? 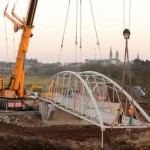