Different requirements around the world are influencing the design of all terrain cranes. Laura Hatton investigates 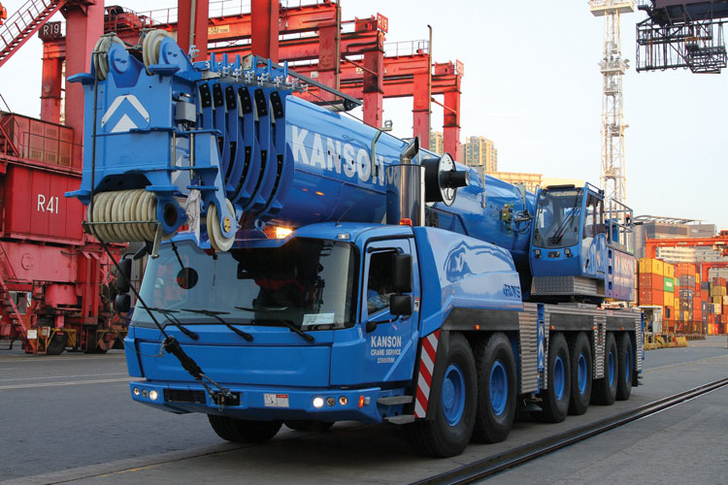 Crane manufacturers are reporting notable growth throughout North America and Canada for the all terrain crane market; Latin America is also proving to be a stable market, with a number of new projects helping boost the economy.

Specific country requirements for all terrains are, however, having an impact on new designs. In Japan, for example, space constraints and tight time schedules have a direct impact on the type of crane chosen. A spokesperson from Tadano Japan explains, “It can be very difficult to get permission to block public roads, especially to assemble cranes. As a result, cranes need to be quick to assemble and be capable of working in confined areas.”

To help overcome this issue, hydraulic telescoping luffing jibs (HTLJ) have become a popular choice for end users in Japan compared to a lattice type jib. Although they tend to be heavier than conventional lattice jibs, HTLJs are easier and quicker to operate, so are being favoured by Japanese end users, the manufacturer says. To meet these requirements in Japan, Tadano offers HTLJ as an option on ATF 400G-6, ATF 220G-5, and ATF 180G-5.

HTLJ has a self-mounting system so an assist crane is not required, saving both time and space. “Generally, we can transport HTLJ with transporting truck since the length of HTLJ is about 10 m at minimum retracted, even though maximum extended length becomes 20 to 30 m,” a spokesperson from Tadano Japan adds.

“Lifting capacity and boom length has been always a demand of crane users, and it will always be a demand,” a spokesperson from Liebherr adds. “But safety is also a very important issue, and it is become more and more important. Safety regulations are also becoming stricter.”

To meet this demand, Liebherr offers the VarioBase, a variable crane support system that reduces the risk of accidents caused by incorrect use of outriggers. The system works by using a load moment limiter to calculate the available capacity on each outrigger. The design won the Safety ESTA Award of Excellence (for more information see IC June, page 55.)

Another influencing factor for customers is cost of ownership. “The argument is that cost should not be the defining factor of an initial investment,” a spokesperson from Terex explains, “The focus should be made on how much money can be made after the investment.”

“In reality, if a product allows you to make more money but it implies a higher investment, is it more expensive or does it just have a higher cost,” Arndt Jahns, Terex product marketing manager for all terrain cranes, says. “Once the product is purchased, its objective is to generate profit for the customer, and here is where design benefits such as versatility and capability are important.”

To meet demands for versatility and capability, Terex designed its Explorer models with worldwide regulations in mind. “Many cranes need to be modified to comply with regulations; the Explorers are ready for the world,” Jahns adds. “Variables such as axle load spacing, overhang and height have been taken into account.”

To meet these demands, the five-axle Terex Explorer 5600, for example, has a 1.4 m overhang, a carrier length of 12.6 m, all-wheel steering, an automatic counterweight rigging system, 68 m main boom and a load moment rating of 480 tonne-metres. It has a capacity of 35 tonnes while telescoping. The IC-1 control system is also fitted for quick configuration. Power comes from a single Euromot IV/Tier 4 Final diesel engine.

“The new crane can carry its double folding jib, a three-sheave hook block and a storage box with a generous payload,” the manufacturer says. Power comes from a single six-cylinder Tier 4 Final Liebherr diesel engine. According to the manufacturer this designs helps save weight and fuel.

Link-Belt’s latest all terrain is the 210 US ton (190 tonne) capacity ATC-3210 which was also revealed at ConExpo 2014. It follows on from the 275 ton (250 tonne) ATC-3275. To help meet transportation demands, the counterweight sections weigh less than 9.9 tonnes. “The counterweights can also be grouped together with other crane components to maximise overflow loads. The ATC-3210 with maximum counterweight, rigging, matting, and fly extensions can move in just three truckloads,” a spokesperson from Link-Belt explains.

From Manitowoc are the Grove GMK6300L and Grove GMK6400, replacements for the GMK6220L and the GMK6300 respectively. Compared to its predecessors, the GMK6300L has an 8 m longer boom, whilst the GMK6400 offers increased load charts. When configured with the Mega Wing Lift and a luffing jib, the GMK6400 has a tip height of 134 m.

Although most manufacturers are keeping tight-lipped about future products, the general feedback is a new range of updated models with Tier 4 Final and Euromot 4 engines; there is even mention of Tier 5 regulation, which is expected to come into effect in 2019. We will have to wait and see whether these models have single- or two-engine designs. Having introduced the topic of the single engine design in last year’s feature, the topic is going to be revisited in an upcoming issue of IC.