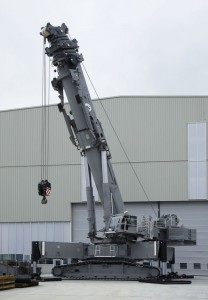 The prototype of the new telescopic crawler crane LTR 11200 recently moved out of the newly constructed assembly shop for large cranes at the Liebherr factory in Ehingen. A special delight for the Liebherr employees who were involved in the design and manufacturing – as well as some customers from the field of erection of wind power plants was, that the family shareholder Dr. h.c. Dipl.-Ing. (ETH) Willi Liebherr made a speech for the official rollout of the new 1200-ton crane. He emphasized the importance of the wind power as the main operational area for the new LTR 11200.

The 100 m telescopic boom and to a large extent also the slewing platform were adopted from the mobile crane LTM 11200-9.1, which has proved itself numerous times at erections of wind power plants. On suggestion of the wind power plant manufacturer Enercon Liebherr developed the concept of a telescopic crawler crane on a narrow track crawler chassis, which is optimized for the driving of the crane in assembled state on the narrow roads in wind parks. The crawler width amounts to a maximum of only 4,8 m. For the crane operation the LTR 11200 is supported on a star support with a basis of 13 m x 13 m. The boom systems with Y-suspension as well as the fixed and luffing lattice fly jibs well known from the LTM 11200-9.1 are also incorporated in the crawler version of the 1200-ton crane.