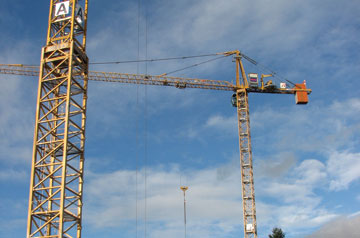 The number of crane operators booked for a safety assessment in B.C. has increased sharply in the first two months of this year, due to the fast approaching deadline for certification.

“Even with the deadline approaching, we will deliver to our maximum capacity,” said Lee Middleton, managing partner with Fullford Harbour Group, the company responsible for offering CraneSafe certification.

“We have filled up all our appointments to the end of January and have started to book into March, because we book in advance and some people who applied delayed their decision.”

Crane operators in B.C. must have a valid safety certificate by Feb. 28 to be legally permitted to work on a crane in the province. Middleton said that he expects that Fullford will complete a total of about 750 assessments in January and February.

“Demand for certification is driven by the number of applicants and we can deliver 350 assessments a month,” he said.

“There have never been enough applicants to meet our capacity. We had 178 applicants in November and average about 120-130 applicants a month.”

The new crane safety certification system in B.C. was launched in December 2008 and a batch of 400 operators graduated by April 2009.

Middleton said Fullford has issued 4,700 certificates of all types to date.

There are another 1,400 assessments underway or that have been booked already.

He anticipates that 6,500 to 6,750 individuals will have been assessed and certified by the end of February.

By mid-March, Fullford will have assessed and certified about 7000 operators.

The B.C. Association for Crane Safety (BCACS) registered and identified more than 10,000 crane operators, which more than doubled the number they initially estimated would need certification in 2007.

When all the new people coming into the system were taken into account, it was estimated that 14,000 crane operators would need certification.

Fullford estimated that they could assess and certify about 9,000 people in a two year period.

The large number of operators needing certification raised concerns that the process would not be completed before the July 8, 2008 deadline. For this reason, the deadline was extended to Feb. 28, 2011. There are several reasons for the difference between the original estimates and actual number of operators certified or registered for assessment.

To begin, the original estimate was developed during a construction boom, which rapidly increased the number of people employed.

Currently, the construction industry in B.C. is emerging from a recession, which has resulted in a lower number of applicants.

Initially, some construction firms registered all their employees, but some of these operators were occasional users. Once the new safety system was understood, these employers reduced the number of registered operators to a select group.

The BCACS planned to assess all operators with out-of-province credentials, but these operators were not required to be assessed due to the Agreement on Internal Trade.

Some operators have retired, died or moved to another industry, such as mines, ports or railways, which is not under the jurisdiction of WorkSafeBC. The recession also pushed some operators to leave the province or find work in a different occupation and industry.

“When you look at it that way, the number of certified operators was not that shy of the original target,” said Middleton. “We are having a fairly smooth ramping down heading into March. The system has served all the people who have stepped forward.”

The BCACS and Fullford are shifting gears from the high volume of operator assessments required in the last two years to a low volume business model.

“The assessment service will continue to be delivered for new workers entering into the market as we make bookings into March,” said Middleton.

Assessment services will continue to be offered throughout the province.

The application process and the assessment fee of $500 will remain the same until the deadline.

But, as the incumbent operator phase comes to a close, the lower assessment volumes mean there will be an increase in the Level A practical assessment fee to $750.

Where is the new customer?