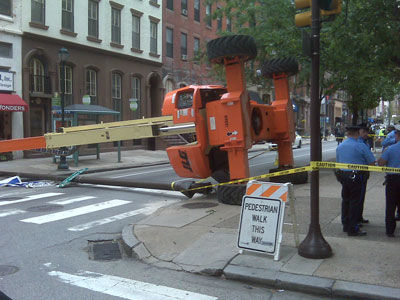 A construction worker was killed and several other people were hurt at about 1:30 on Monday afternoon when a construction “boom lift” toppled over at 21st and Walnut Streets in center city Philadelphia.

The crane and/or falling debris also struck a 70-year-old woman in a passing car, breaking her arm. She was reported in stable condition at Hahnemann Hospital.

Used with permission from Crane Hotline.