Two specially designed GMK4100 mobile cranes from Grove, customized for work indoors and in tight industrial spaces, have completed their first job. The 100 t capacity cranes lifted an 82 t piece of machinery at a 6.5 m radius inside a manufacturing facility just 10 m tall in Germany. 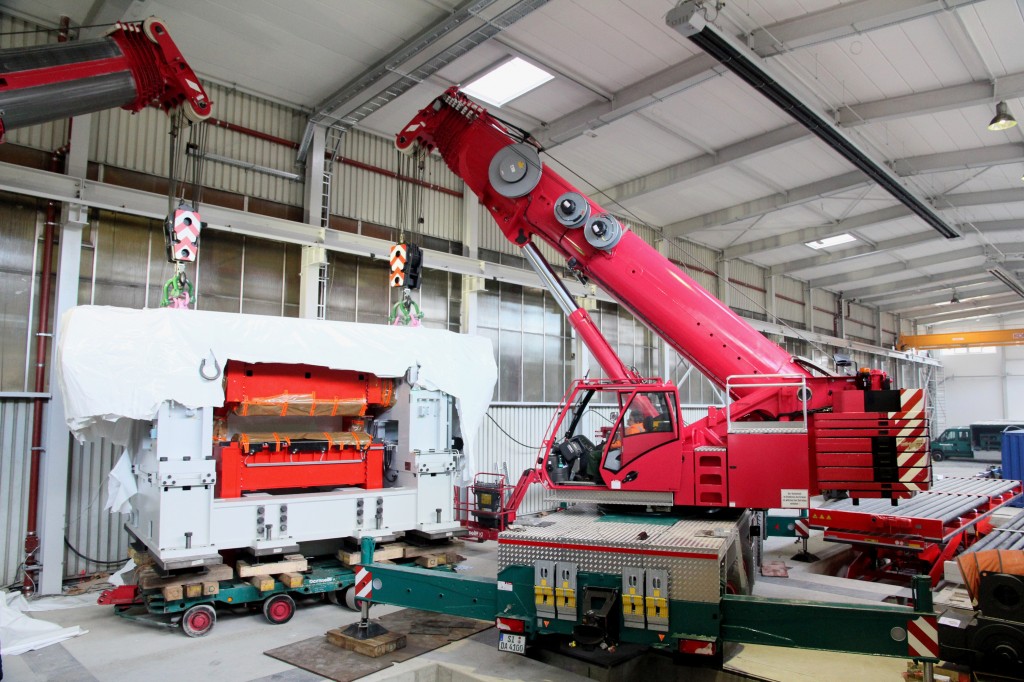 The cranes, named the GMK4100S, were built at the request of German rental company Dornseiff, based in Burbach, to meet the demand to perform heavy lifts indoors.

The GMK4100S’s 35.6 m boom is shorter than the standard GMK4100L (which has a 60 m boom) and is capable of telescoping loads of up to 50 t and lifting 32 t with the boom horizontal. When retracted, the crane’s boom is just 8.5 m long. The crane also features a tiltable boom head with hydraulic pinning to improve under roof reach and a new compact hook block that combine to offer market-leading lift ability in a compact package.

“Designing a 100 t crane for indoor use presents a lot of challenges but it gave us the opportunity to design something unique,” he says. “We know the standard GMK4100 is a very capable crane and so our experienced engineers got to work adapting it. We’ve made a lot of specialized design changes and created a compact machine that doesn’t compromise on strength.”

The customized crane features the same number of boom sections as the GMK4100 but each section has been shortened to reduce the length of the boom itself. The crane also features a shortened telescopic cylinder taken from the GMK5130-2, which gives better telescoping strength up to 50 t. With a greatly reduced boom weight, the crane has the stability and capacity to lift impressive loads at shallow angles, including at zero degrees, where the crane can lift 32 t at an 8 m radius or up to 4.2 t with the boom fully extended to 36 m.

In addition to giving the crane excellent indoor lift abilities, Manitowoc also had to make numerous design adjustments to allow it to operate in very tight locations. For example, the company created a tiltable boom head and new compact hook block. The titltable boom head means the boom can extend closer to the ceiling while the compact hook block brings the hook closer to the boom and allows the crane to perform lifts at tighter angles. The hook head can also be attached directly to the boom without any hoist rope, further reducing the distance between the boom and hook.

At just 10.7 m long, the GMK4100S’s carrier with all-wheel steering and Megatrak suspension is highly maneuverable, making it ideal for interior operations in workshops and warehouses. The four-axle crane can also be configured with a GVW of 40 t, 44 t or 48 t, making it ideal for easy transport on German and other European roads.

Dornseiff’s GMK4100S cranes are based in Wetzlar and Olpe where they lift heavy machinery in tight spaces and form part of the company’s 45 strong rental fleet. Manitowoc is also talking to several other companies about future GMK4100S deliveries.