Huisman has introduced a new series of large offshore cranes with lifting capacities up to 900 tonnes.

The new cranes have been developed to meet the increasing demands of the offshore construction and sub-sea market, for operations in ultra-deep water and harsh marine environments.

Two orders for the new cranes have been received already. The first for a 900 tonne AHC sub-sea crane has been placed by the VARD (former STX OSV) shipyard in Norway and will be installed on a 161metre offshore sub-sea construction vessel for the Norwegian Owner DOF Subsea. The second crane, a 600 tonne AHC sub-sea crane, will be installed on a new 160 metre DP3 Heavy Construction and Flexible Pipelaying Vessel for Subsea 7. The vessel will be built by the Korean shipyard Hyundai Heavy Industries. 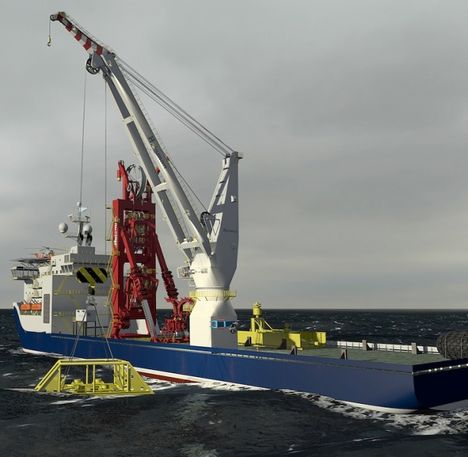 The main hoist of the new cranes will be outfitted with either a 30 or 450 tonne traction winch, a storage winch will be placed in the hold of the vessel to keep the centre of gravity as low as possible. This winch can either store 200, 400 or 600 metres of wire rope. The wire rope can be reeved into two falls to achieve the maximum capacity.

Sales manager Gerben Roks said: “Our intensive research and the operational feedback from our clients have convinced us not to use single fall for these cranes. Besides the obvious handling problems with very large diameter wire ropes, the short life span results in tremendous operational expenditures for the operator. For this reason, Huisman has developed a patented anti-twist device to mitigate the risk of the twisting of lower block and wire rope (‘cabling’) during sub sea lifts in double fall configuration.”