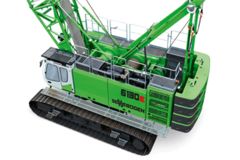 Sennebogen, which also builds material handlers, port equipment and lifting cranes, is using this month’s Bauma exhibition in Munich, Germany, to take the wraps off a new 130 tonne duty cycle crawler crane, the 6130 HD. The company, which is headquartered just an hour up the road from Bauma, in Straubing, Germany, has built its reputation on machines that are robust, reliable and long-lived as president Erich Sennebogen Jnr explained.

“We are not a low price manufacturer, and we will never be one. That is not the philosophy of Sennebogen. The philosophy is quality and added value for the customer. Added value means a robust design, top quality, multi-purpose machines and also good after-sales service. That is different to buying three cheap machines and using two for spare parts for the one that’s actually working, because those three machines cost the same as one Sennebogen,” he said.

Mr Sennebogen added, “We believe the buying cost of a machine is only a small segment of the total lifetime cost of a machine over its working life, of let’s say 15,000 or 20,000 hours. At the end of the day, the initial cost of a machine is not decisive overall. That is something a lot of customers appreciate, especially when they really want high-performance machines.”

The introduction of the new crane has been driven by the need to comply with Stage IIIB engine emission laws in Europe, and according to Mr Sennebogen, the company also took the opportunity to upgrade other aspects of performance, including the hydraulics.

“One key discussion today is fuel consumption, and improving efficiency is a crucial development point for us. There isn’t scope to save 30% or 40%, but we have done a lot with things with the hydraulic system, hose diameters, diameters in the valve block, and worked on things like the pump and motor regulation, and those are areas where we can find 5%, 10% or even 15% more efficiency,” he said.

Duty cycle cranes differ from machines designed purely for lifting in terms of their power and structural design to give them the strength to cope with sudden high loads that are part and parcel of applications such as foundation construction, dragline work and demolition. The difference is also illustrated in raw power. Whereas a 130 tonne capacity lifting crane might have about a 250 – 300 kW engine, the 6130 HD comes with the choice of a 570 kW or 708 kW Cat diesel.

“The heavy duty crane range has been part of our portfolio for more than 50 years. We have bigger undercarriages, bigger swing bearings and bigger engines. The 6130 HD is really a very robust because the dynamic forces on the crane are much heavier than on a lift crane, and of course you want a long lifetime. It is also a power station, because heavy duty cranes are often used to drive front-end attachments like hydraulic diaphragm wall grabs, casing oscillators, sheet pile vibrators and so on,” said Mr Sennebogen.

As well as the improved performance, the 6130 HD is fitted with the new Senncon control unit, which provides the operator with information about the crane’s status, along with any warnings or malfunctions. The idea is that it does not overload the operator with information, but provides only the necessary information. It also groups other functions, such as the load moment indicator (LMI), which reduces the number of displays required in the cab. Again, the idea is to allow the operator to concentrate on the work in hand by providing only the salient information.

Another key feature of the 6130 HD is the telescopic undercarriage, which narrows down to 4.0 m for transportation, compared to the 5.1 m width that is used on site to provide stability.

The 6130 HD will be on Sennebogen’s stand at Bauma, alongside the 655 HD, its previously announced 55 tonne new duty cycle crane.