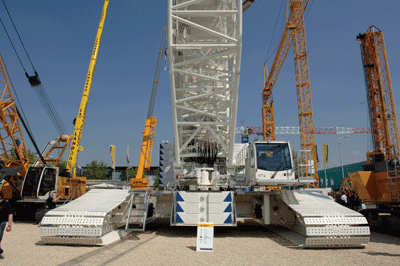 The largest machine on display t bC India is likely to be Liebherr’s 600 tonne capacity LR 1600/2 crawler crane, originally launched at ConExpo 2008. The machine at the show has been bought by Shethia Erectors & Material Handlers Limited, which is one of Liebherr’s largest customers, operating a fleet of350-, 400- and 600- tonne crawlers and all-terrain cranes up to 400 tonnes. The LR 1600/2 was purchased primarily for the erection of wind power plants.

Also on the stand will be Liebherr’s 71 EC-B 5 FR.tronic flat-top crane with the 63 LC interior climbing system. The company says this combination of flat-top crane and compact interior climbing system is ideal for the Indian market, due to its simplicity and safety features. The modular unit has a maximum load capacity of 5 tonnes, while a 1 tonne can be supported at the maximum radius of 50 m.

The wheeled loader range will be represented by an L 580 2plus2 equipped with a universal earthmoving shovel that has a short, straight underside and push-on teeth, including a V-pattern overflow plate. The hydrostatic travel gear on the L 580 2plus2, a unique feature in its class, cuts fuel consumption by as much as -25% compared with wheel loaders with a conventional drive train.

Also on show will be an LB 20, rotary drill rig. It is designed for bore diameters up to 1.5 m and a maximum drilling depth of 53 m, and has a rated torque of 20 mt.