A reader spotted a tandem lift with a difference in Taiwan, they arrived in our offices just before Vertikal Days and taking a quick look at them, we completely missed what was going on.

Two Liebherr big cranes are working together to lift a large boat, our reader tells us that the lift took place in Taiwan and he believes the crane owner is based in Kaohsiung City, but we were unable to verify this or when this lift took place.

He also says that the two cranes are both LTM1500-1.8 however we think the one at the rear is in fact an eight axle LTM1400 but we digress. 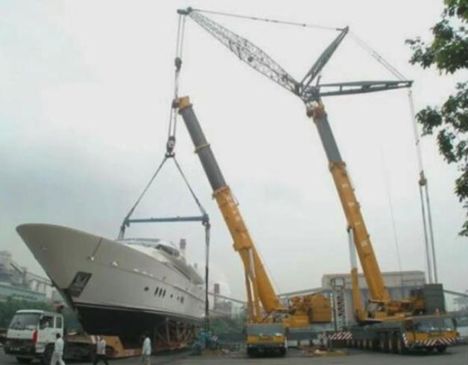 The large boat is being loaded aboard a special transport trailer and clearly the crane company felt that the LTM1500 needed some help to manage the lift, so it rigged the second crane with a luffing jib and placed it behind. It then hooked it up to the boom nose of the LTM1500 to assist.

It is hard to image that Liebherr would have sanctioned this sort of tandem lift and one wonders about the capacity of the boom nose extension lugs.

We assume that the lift passed off without incident – and out of interest the two load indicators would probably have been provided a good indication of load sharing? The rear crane’s would have worked in the normal manner, while the font crane would have shown the actual load less the effort applied by its helper crane!