A three axle truck crane dropped into a large sinkhole that opened up on a road in Dongguan, Guangdong, Southern China earlier this week.

The 25 tonne Zoomlion QY25V crane was simply travelling along the road when the ground opened up and swallowed it. We understand that no one was injured. The incident has been blamed on recent heavy rains causing underground streams to erode the ground under the thin road surface, which is then too weak to support heavier vehicles, such as the crane. 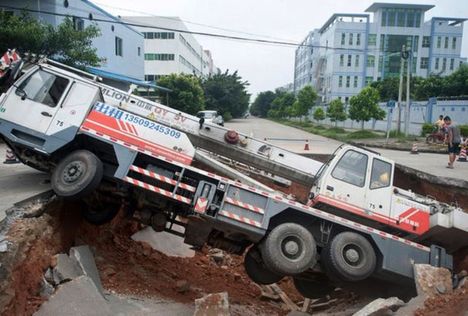 The crane was almost swallowed up by the large sinkhole