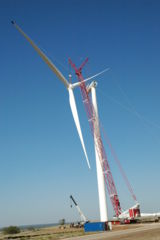 In Oklahoma, wind turbines are now about as prevalent as old oil derricks were in days gone by. Much easier on the eyes, the sleek, white turbines punctuate the horizon and provide clean electricity for thousands of homes and businesses. Wind farms have been or are being built throughout Oklahoma, especially on prairie land west and north of Oklahoma City.

In late September 2011, a 98-turbine wind farm, which was previously a family ranch, was being built about 100 miles west of Oklahoma City. Manufactured by Siemens, 95 of the turbines are 2.3 megawatts and three are 3.0 megawatts. The turbines measure about 80 meters (262 feet) in height. Developers are RES, Inc., Siemens and OG&E Corp, the latter of which is leasing the land for the wind farm.

K&R Wind, based in Dallas, is managing the large crane work. Houston-based Consolidated Crane is handling the smaller cranes and off-loading, and Turner Bros. is managing the permitting and transportation.

Onsite is the erection crane, a 2008 Terex CC2800-1 crawler rigged with 84 meters of main boom and 12 meters of jib. It has 180 tons of counterweight and is rigged with the Terex S7 wind kit. KR Wind Site Manager Bobby Baker says the crane is erecting five to six turbines a week, depending on the “walk time” between windmills.

Also onsite are two 250-ton Kobelco CKE 2500s, two 130-ton Tadano ATF110G-5s and a 90-ton Link-Belt 8690. The Terex CC2800-1 erects the top tower, the nacelle and the rotor with blades. The Kobelco CKE 2500s erect the bell-shaped lower towers. Other cranes onsite are also used to off-load wind tower components from trailers. Consolidated Cranes’ Link-Belt 8690 assists the KR Wind’s CC2800-1 in the final positioning of the awkward rotor and blades.

The strategic location of each windmill is determined by many factors including the ability for the cranes and other equipment to get to the site. The big CC 2800-1 generally walks from site to site, although it must be de-rigged in some cases to travel across roads, on hills and in between various obstacles such as fences, power lines and the like.

“We’ve de-rigged, moved and gotten the crane hook ready in 16 hours,” Baker says. “It took two operators, four riggers and four truck loads. When you do it that fast, you can’t have green people. You have to know the crane on both ends.”

For a project of this size, trained crane experts are critical, Baker says. KR Wind has staffed the project with 12 people, including seven highly experienced and certified crane operators, a site transport operator, two riggers, one crane supervisor and a site manager. Safety meetings are held every day and visitors to the wind farm must go through safety training.

Crews worked on this particular jobsite throughout the summer, which was hot and dry. Down days were few and far between, Baker says. In September, crane operations were shut down a few times due to high wind speeds, an understandable occurrence since wind farms are located in the windiest areas possible.

“We’ve had a few wind outs,” says Baker. “Twelve miles per hour is the max that you can do crane work but our wind speed devices shut us down at 9.8 miles per hour.”

He says the problem is that wind speeds can change suddenly. “You don’t want to be caught with a rotor in the air and high wind speeds.”

Organization is critical in the erection of a windmill. A delay in one component causes a chain reaction of delays.

“We’ve had hubs coming in late,” says Baker. “You try to work around it but we’ve got to go back to three windmills to erect the hubs.”

Among the most interesting elements of the process is the lay down of components at each windmill jobsite. There’s a procedure for exactly how the foundation, lower section, upper section, nacelles and rotors with blades are positioned. Each site looks the same, with the components all laid out identically. The upper tower section is positioned across from the other pieces while the rotor and blades straddle the lower part of the tower, precisely at the perfect angle for lifting.

“The Siemens’ sites are all staged so that the main, big crane doesn’t have to move,” says Baker. “The main crane is set on a 60 by 80 foot hardstand [mat]. It’s like concrete. Very stable.”

While the process for erecting the windmills has become routine, it’s still impressive nonetheless. Baker says all the crane operators are first rate. They appear to have every maneuver – tall and tedious as they are – down to an art and a science. It’s pure finesse.

On this sunny, perfect blue sky day in September, the CC-2800 was set up on its second erection of the day at about 1 p.m. The first task was to swing around and lift the top section of the tower. Rigged with synthetic slings attached to eyes on either end, the top section was hooked on one end to the main crane and on the other end to the Link-Belt RT. The main crane lifted the section just a bit so that crews could come in and scrub it down with big soapy brushes and then rinse it off with hoses from an onsite truck with a water tank. While the tower section did not look dirty, Baker says that Siemens is very particular that everything must be cleaned before it’s erected.

Once clean, the section was slowly lifted by both cranes until the main crane had it upright and all the weight on its hook. From there, the CC2800-1 operator slowly lifted and turned the top section so that it was aligned atop the lower section which had previously been bolted to a concrete foundation. The placement was precise and measured; the component never swinging so much as a hair. It was placed on top of the lower section slowly and deliberately. Waiting inside the lower tower were crewmen ready to bolt the top section to the bottom section. The procedure was seamless.

As the tower section was bolted together, crews on the ground went about the task of rigging the crane to the nacelle, which is the heaviest and highest component. For this piece, the operator lifts it off the ground while crewman guide it with attached ropes. The nacelle is gently placed atop the tower, and in no time crew members emerge from the top of the hub, some 80 meters off the ground. They unhook the rigging gear attached to the crane and then begin securing the hub to the tower.

All the while, crews on the ground set up the final lift, that of the blades that are already attached to the rotor. This is the part of the process that appears to be the most delicate, as the assembled blades are long, awkward and heavy.

This lift process is conducted much like a band leader would lead an orchestra.

First the CC-2800-1 is rigged to the center of blade assembly. The Link-Belt RT is also rigged with a specially designed blade grabber, holding the lower blade steady while the big CC2800-1 slowly lifts the other two blades and rotor section. Slow and steady, the operator lifts the blades up as the Link-Belt RT keeps the third, lower blade in place. Once the assembly is totally vertical, and all the weight is shifted to the main crane, the RT leaves the site to give the big crane room to turn the rotor in mid air so that it can face the hub. Ropes are still attached to two of the blades so that crews can guide them from the ground. In minutes, the operator has positioned the rotor precisely in front of the hub. The boom of the crane lowers just a bit so that the rotor can be guided gently into place. Crews in the hub begin their work of bolting the rotor section to the hub, finally unhooking the rigging from the rotor. The crane’s work is done for the day.

Baker brags about the operator who handled the erection without a hitch. “He’s a natural on this crane.”

Onsite the day of this erection are Terex’s Sven Ebinger, global marketing director, and Guntram R. Jakobs, product marketing manager for Terex Cranes, respectively. On the design team that engineered the CC-2800-1, Jakobs is well aware of the crane’s attributes, and yet he says watching it erect the wind tower is still awe inspiring.

“This crane was introduced in 2002 and it’s a well known crane to the US market,” says Jakobs. “With a capacity of 660 U.S. tons, the major markets for this crane are the petrochemical, infrastructure and wind sectors.”

The CC-2800-1 is a versatile crane, and Terex has designed it to be easily adapted with special equipment like a boom kit to enhance lifting capacity for steep boom positions for wind turbine erections. Known as the S7 Kit, the wind package for this crane is a boom re-enforcement kit.

“It gives you strong boom sections on the bottom and lighter sections on to the top to give you strong capacity in steep boom positions to get the wind turbine up there,” says Jakobs. “We also offer a truck-mounted chassis and a narrow track chassis for this crane. This crane can walk, fully erected, from one turbine site to another.”

Jakobs’ passion for cranes, and this crane in particular, is obvious when he speaks. He says the CC 2800-1 has proven to offer its owners a high return on investment.

“It’s all about uptime,” he says. “And high return on investment. That’s why we launched this machine.”

“We wanted to make sure this crane was optimized for transportation,” he says. “You can strip it down to be legal in all countries around the world. We’ve tested it for standards around the world and this makes the crane very popular. We’ve sold more than 300 units. This is a very popular Terex crane.”

Today wind towers are exceeding 140 meter heights, Jakobs says. “This crane can still cope with 140 meter wind towers,” he says. “It can erect the 3.5 megawatt units. We increased the versatility of the machine by providing higher line speed and pull. We gave it more horsepower and did some minor modifications on steel structures to have more capacity in steep areas.”

Currently, the most notable wind contractors in the U.S. own this machine, including KR Wind, Mammoet, Wanzek and Guay. For the future, Jakobs says the challenge will be to meet new EPA regulations. “But this will be a challenge that all manufacturers will have to cope with.”

Today the CC2800-1 comes with a high tech operating system known as the IC1 system. Developed by Demag, the touch screen operates much like a laptop or iPad.

“It’s very sophisticated,” Jakobs says. “If you are operating the crane close to a power line, and you get too close, the crane stops automatically. You can teach the crane that you only want to be within a certain radius and the crane will stop automatically. This system features all types of functions and allows you to set it up for your own conveniences. If you want the winch to come in quickly or slowly, you can set it to do that. You can also program three different operators to the machine. If another operator takes over, his settings take over like a memory switch.”

There’s no question that Baker from KR Wind is impressed with the crane. “We have no problems with this crane on wind projects,” says Baker. “It does what it is supposed to do very well.”