A gantry crane used to install section of the new Port Mann Bridge has suffered a partial collapse.

Max Logan with the Gateway Project says a 720-tonne gantry used to installed pre-made concrete portions of the bridge fell off its support legs.

The incident took place near the north tower of the bridge.

It appears a 90-ton chunk of concrete fell into the river, but no one was injured, including on the water below the bridge.

Logan says because work was taking place above that area of the river, no marine traffic would have been allowed in the vicinity.

The contractor responsible and WorkSafe BC are now trying to determine what caused the crane to collapse.

WorksafeBC has closed the work site for at least the day while an engineer determines if its safe and investigators determine a cause.

It is not clear if the incident will affect the schedule for bridge construction. Currently, the new Port Mann is scheduled to open late this year.

The new 10-lane span is being built to replace the current five-lane bridge which carries the trans Canada Highway over the river between Surrey and Coquitlam. 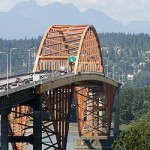 Crane comes down in KL