Boom truck goes over in Alaska 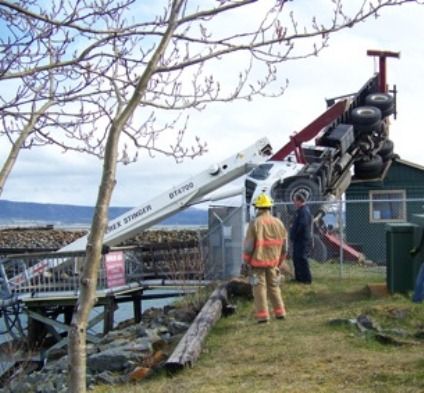 A 22 ton capacity boom truck tipped over on Friday in Homer Alaska while working at the harbour.  The boom truck, a Terex Stinger owned by Mr C. Construction, had been called in to remove a small crane from Petro Marine’s harbor fuel dock.

The operator was extending the boom to check the radius when it went over, some reports put the tip down to a heavy gust of wind, although it is likely that the boom was at too low an angle for its length?

Cecil Cheatwood of Mr C. Construction, which only took delivery of the crane recently, said: “Basically, we were trying to determine if that truck was able to do that job. I think we can all attest it can’t. It never even hooked up to the crane. All they were doing was stretching the boom out to see if they could reach that far when the gust of wind hit the crane.”

The truck was rescued with a 100 ton crane owned by North Star Terminal and Stevedore Company.