An All Terrain crane over turned in Offenbach, near Frankfurt, Germany, last week, crushing a covered trailer and damaging a car.

The crane, owned by Homburg based crane rental company Spengler, was reportedly loading a large membrane filter press onto the trailer when it flipped over backwards. The boom landed on the trailer and then came down across a road onto a BMW parked in a car park on the opposite side of the street.

Fortunately no one was hurt in the incident, however the crane operator is said to have suffered from shock. The incident is being investigated. 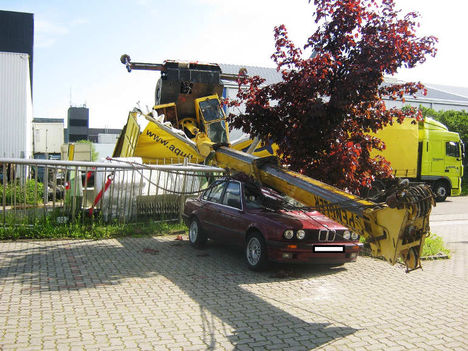 This one has perplexed us, mainly as our contributor did not provide sufficient information and local press reports do not yield anything more. The crane was lifting the load over the rear yet flipped over backwards. We initially thought that the slings or a cable broke but it looks as though the load was still attached, so we can only surmise that the ground under the front of the crane completely gave way?

We are still looking into it.

Have a niche you need scratched?