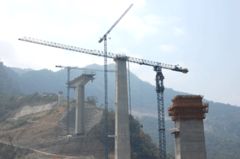 Linden Comansa is helping to construct the Mexico Tuxpan highway which will link the country’s capital city with the coast town of Tuxpan, in the Gulf of Mexico.

The 293 km road will include 2.5 km of bridges and 4 km of tunnels. Sixteen bridges are to be built along a 36.7 km section in the State of Puebla, alone. One of them is the 850 m long San Marco bridge for which five 18 tonne Linden Comansa 21 LC 290 flat tops are being used in the construction of the pillars. The pillars will stand more than 200 m high, making it the world’s second highest pillar bridge, after the Millau viaduct in France, according to Comansa.

Groke, Linden Comansa’s official dealer in Mexico, is carrying out the work, lead by the Mexican ICA and Spanish FCC consortium.