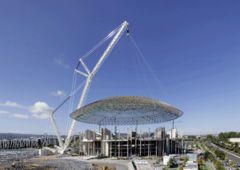 At the beginning of July a convoy of low-loaders pulled out of the Liebherr plant at Ehingen in Germany, carrying the components of an LR 11350 crawler crane. The destination was the Basque city of Vitoria-Gasteiz in northern Spain. That was where the new crane, owned by Usabiaga, made its first lift.

It was a spectacular one too. The entire latticework structure of the domed roof of the city’s sports arena was to be lifted and moved about 200 metres onto columns erected for the purpose. In anticipation of a great photo opportunity, a remote-controlled camera helicopter, an airship and half a dozen radio and television teams recorded the job. Andrés Guerra, driver of the Liebherr LR 11350, never before had so many spectators.

The circular sports arena was built in 1975 as a cattle market. Its conversion was in the 1990s. To increase capacity from 9,900 to more than 15,000 spectators, the lattice dome now had to give way to a wider spectator stand and arena ring arrangement.

With 130 metres of reach, the crane first lifted the dome and then had to align itself by a few degrees so that the suspended latticework structure could be drawn over the level of the stadium columns. A gross load of 218 tonnes, at an outreach of more than 70 metres, was suspended from the hook. The LR 11350 was rigged with 830 tonnes of counterweight. The suspended ballast alone, held at a radius of 30 metres from the slewing ring, weighed 600 tonnes.

The fine latticework structure, 81 m in diameter and with a surface area of more than 5,600 square metres, was lifted from the building. When the load was suspended over the arena, the crawler tracks were slowly set in motion, and Andrés Guerra slewed the crane. It took an hour and a half for the LR 11350 to cover the required 80 m. In that time it also slewed through 180 degrees, and set the load down.

Project manager, Julio Herrero, was relieved and delighted. “After the dome had been moved, we only found minimal deformation of the lattice structure.” This was kept to a minimum by rigging it with 24 lifting points and making smooth movements.

A single crane was chosen over a tandem lift because it saved space and a much smaller area of ground was affected by the need to compact the subsoil. A total distance of 320 m would have had to have been prepared for the move, while using the one crane only needed 80 m of asphalt to be taken up, excavated, and compacted.