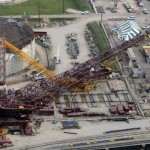 In Dallas Texas yesterday there was yet another crane accident. http://www.brandonsun.com/story.php?story_id=136766 I normally don’t have much to say about mobile crane accidents, but this is becoming egregious and obvious as to what the problem is down there. If you look at the last year in Texas, I can point to six accidents causing injury and making the news. How many didn’t make it on my radar?

The cause of four of the incidents is quite simply lack of inspections. The Dallas accident yesterday was due to a lattice boom rope failure (1 injured). The Huston Oil Refinery 2500 ton crane had allegedly the wrong bolts in the turntable (4 dead). A Tower crane operator wasn’t paying attention and the hoist limits had failed. As a result the crane two-blocked, parted the load line, and the block landed on a concrete truck driver. (1 dead). At Dallas Stadium a boom rope parted while attempting to lift the boom off the ground (3 injured). The other two accidents that come to mind are over turning accidents (3 injured). Save the over turning problems, the other 4 accidents are clearly preventable with inspections.

In May of 2008 I was contacted by the Dallas Fire Department Fire Prevention Officer. We discussed the possibility of me performing inspections on tower cranes and teaching them how to do it to protect the Dallas citizens. The follow up phone call was a disappointment to us both. The City had balked at the idea. The following month three of these accidents happened in one week.

Counting the dollars is a ridiculous way to decide safety measures. Many large entities argue that inspections and operator regulation are not necessary. ABC represents contractors all over the US. C-DAC (Cranes and Derricks Advisory Committee) is a proposal by OSHA to begin crane inspections as a compulsory item. Robert Hirsch, Director of Legal and Regulatory Affairs for ABC spoke before OSHA about C-DAC. His intention was not in support of protecting the long-term bottom line and or safety of workers, but rather he had this to say “…and to eliminate, or at the least significantly lessen, burdens that the proposed rule would otherwise needlessly impose.” Inspection to the standards laid out by the manufacturer should not be a decision that is hard to support. The manufacturer has their reason for wanting things done and it should be done, period.

The bottom line is not money. The bottom line is life. If the construction industry in the U.S. cannot safely hoist, or even choose to inspect cranes after six accidents in one state in one year, then OSHA is charged with the responsibility of stepping in and changing the practices of the industry. I may not be impartial since I am a crane inspector, but maybe right-to-work states such as Texas should look to California and Canada to see what the benefits of inspection and a skilled work force are? Maybe if you compared the cost of inspection and repair to the cost of lawsuits it would be a clear no brainer?