Today, highway construction in urban areas is almost always performed at night. State Departments of Transportation (DOTs) around the country have discovered that night jobsites are safer and more efficient for a number of reasons. 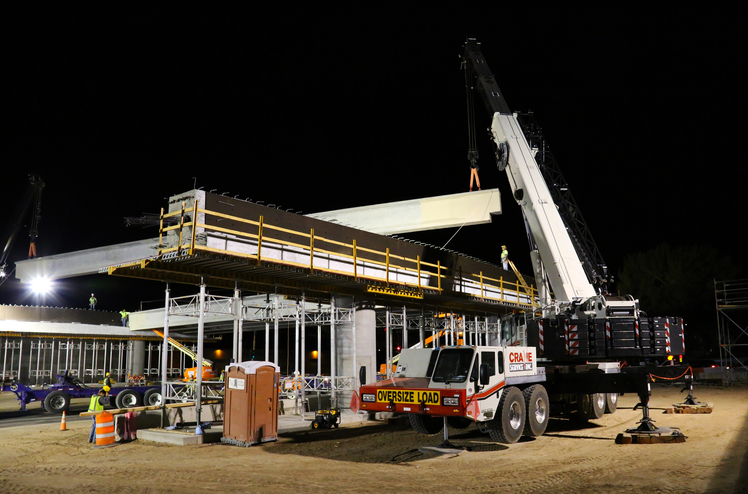 OSHA and DOTs have developed comprehensive safety measures for nighttime jobsites, and modern construction lighting systems create a work environment that is as luminous as working in daylight. Crane-owning companies are adjusting to the increase in nighttime work, and crane manufacturers are looking for ways to adapt cranes to these conditions.

At ConExpo in March 2014, Link-Belt introduced its first crane with a standard lighting package, the 210-ton capacity ATC-3210. The lighting package on the new all-terrain crane makes it easier to set up and rig the crane in the dark hours of the early morning or dusk. There are high intensity LED lights on the front of the operator’s cab and at the outriggers. The engine bay now has lighting as do the ground control stations for outriggers and suspension. Other optional lighting includes high intensity work lights above the operator’s cab, lights that illuminate the walkways on the upper, a right-side, forward-facing high intensity work light and left and right high-intensity work lights mounted atop the upper to illuminate the swing area. Plus, remote-controlled single and dual boom floodlight options are available.

While his company doesn’t do that much night work, he said it is becoming more prevalent. Warianka pointed to a recent job that involved the company’s ATC-3210 and ATC-3275 setting bridge girders at night.

“The contractor had the job lit up really well, with four light plants illuminating the work area of each crane,” he said.

While the crane’s lighting package isn’t really a factor in lighting up the worksite, it’s still a great convenience for rigging the crane.

“The lights are really an asset when you are rigging the crane or setting it up in the early morning hours, or sometimes we will assemble a crane at night,” Warianka said. “We envision more crane companies offering better lighting packages in the future. I can see them being used on rough terrain cranes too.”

He said crawlers cranes would be the least likely cranes to be equipped with comprehensive lighting packages because the type of work they do at night generally involves a well-lit jobsite, and rigging a crawler is different than rigging a mobile crane.

“Tower cranes have lights on them,” said Warianka. “Tower cranes are sometimes on a job working 24 hours a day and two shifts. With mobile cranes, we can see a need for a lighting package for the short days of winter or when you want to keep working at dusk or during cloudy weather. These lights will also come in handy when doing concrete pours, like on a high-rise job. Sometimes concrete pours go into the night or start early in the morning. The lights you use on a crane will be job specific.”

In a few cases, Crane Service has provided lighting equipment, for instance when the crane might be grabbing on and needs to be tied to the load for a while.

He has been impressed with the remote-controlled lights on the new ATC-3210.

“The light on the boom can be operated by remote control so that you can actually rotate the light and spotlight something below the crane,” he said.

Rick Curnutte, product manager, telescopic truck and all-terrain cranes, Link-Belt, said the driving factor for the lighting package was lighting the jobsite, but for set up and tear down of the crane.

“People in our industry tell us what they want to see on a crane and we try to listen,” said Curnutte. “In order to beat traffic, cranes are being dispatched much earlier to the jobsite, and to be there in a timely manner, crews are often setting up the crane in the dark.”

Rigging a crane at night without big jobsite lighting systems means the crane owner will have to bring out his own lighting system. With a crane lighting package, the rigging is much easier.

Curnutte said that not having a lighting package makes it difficult to lay down mats and perform the ordinary challenges of rigging the crane in darkness.

Customer feedback has been positive, especially the remote control boom lights and the engine bay lights that allow the operator and rigger to check the oil and provide maintenance to the crane.

“There are lighting packages for looking down at loads on the boom and cab lighting, but I don’t think anyone has gone to the extent that Link-Belt has gone to,” Curnutte said.

While the new lighting package from Link-Belt has only been out for a few months, crane lighting has become a topic of discussion for customers, he said.

“It’s still early and there’s been a lot of discussion. How far we take it down the product line is going to depend on the demand we see. Definitely for the ATs it’s been a hit and the ATC-3275 will get the same lighting package as the ATC-3210. This idea definitely struck a chord when we showed it at ConExpo.”

Again, Curnutte stressed that Link-Belt’s goal with its crane lighting package is not to provide lighting for the jobsite lifting.

“There are some aspects of lighting we did that do benefit the jobsite, but you have to be cautious about using some of those lights during lifting because you have ground personnel who need to be able to look at the operator in the cab, and you don’t want the light affecting their vision or ability to see what they need to see. But generally, we feel like we’ve hit a home run with this lighting package.”