In the early 1930s, the crews that built the Bay Bridge that linked San Francisco to Oakland probably did not consider how difficult it would be to dismantle the historic crossing 77 years later. In fact, the joint venture company tasked with demolishing the bridge worked almost a year engineering the demolition, determining how to dismantle the bridge piece by piece, and taking into account all sorts of major league environmental and safety issues. 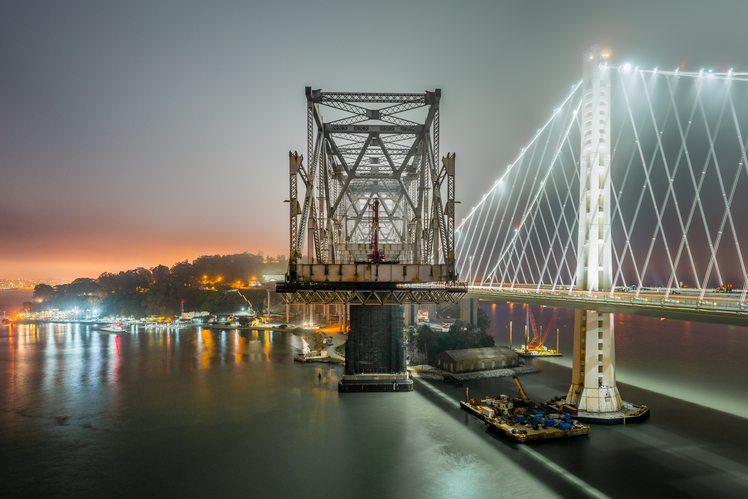 The contract for the project was awarded in January 2013 to a joint venture of Silverado Contractors and California Engineering Contractors. The first nine months of the project were consumed with engineering and planning, including detailed drawings and animations of every step of the demolition. Crews started work at the bridge site in September 2013, shortly after the new Bay Bridge opened to traffic.

For the first six months work centered on removing the bridge deck and preparing the structure for precisely engineered demolition so that when a piece is taken off the rest of the bridge stays intact. Support beams were added in strategic places to assure the bridge doesn’t collapse upon itself.

San Francisco-based Sheedy Drayage has supplied four mobile cranes for the project that is scheduled to be totally completed by July 2016. The cranes include two 200-ton Liebherr LTM 1160/2 all terrain cranes and two 90-ton Link-Belt HTC 8690 truck cranes.

“Generally, one crane is holding the steel piece that is being cut free, while the other crane is hoisting the man basket with men who are burning the pieces loose,” said Michael Battaini, co-president, Sheedy Drayage. “Each piece that comes down is in the exact predetermined sequence and it has been precisely engineered for weight, dimension, and centers of gravity. Our cranes lower the beams onto a waiting truck on the bridge adjacent to our cranes.”

Each pick has been examined on an individual basis with 3-D modeling used to analyze weights and centers of gravity. One connection member may need to be cut into 10 pieces to be manageable for the crane being used.

“The cranes are working from the deck of the bridge that is being dismantled,” said Battaini. “Looking at the pictures, it’s amazing. The bridge is broken in two now and the cranes are working their way backwards. The cranes sit right back on the edge of that gap and are cantilevered out. The last point of support is a few hundred yards back.”

The cranes are sitting on the lower deck of the double deck bridge. From the lower deck to the top of the truss varies from
94 feet up to 200 feet above the lower
deck and it’s an additional 200 feet below to the water.

In a year or so, tower cranes will be installed to assist on the work needed to be done at higher elevations, according to Rich Riggs, project manager, Silverado Contractors.

“The lifts are limited by the capacity of the cranes,” Riggs said. “Although there are structural members weighing over 100,000 pounds, we are limited by crane capacities and radii to varying degrees. An average range would be 15,000 pounds to a maximum of 40,000 pounds.”

While every element of the project has been planned down to the Nth degree, there are still a range of challenges to overcome at every turn.

Environmental protection is a huge concern, as is the fact that the bridge has layers and layers of coats of lead paint.

What is the biggest challenge for crews working at the site?

“Demolishing a bridge while not allowing anything to enter the water below, even so much as a spark from a torch,” said Riggs. “Containment measures are hung below the deck that we are removing. We designed custom man baskets to get the torch cutters to the work and that also act as localized containment measures.”

Demolition work is inherently dangerous, so the precautions being taken are a huge part of everyday work. Due to the old lead paint on the bridge, crews must wear protective clothing and respiratory protective devices. Riggs said other safety concerns include fall protection, fire hazards and overhead hazards.

There are also windows where work has to be halted to allow for environmental concerns such as interrupting bird habitats and bird nesting. Additionally it’s an active fisheries area so there are restrictions related to work that can be done in the water.

Riggs said that the joint venture group has coordinated work with a variety of entities and government regulations.

“These groups include the U.S. Fish and Wildlife Preserve, The Bay Conservation District, the Army Corps of Engineers, the U.S. Coast Guard, NOAA and others,” he said. “There are approximately 20 agencies with jurisdictions and permits within the project limits.”