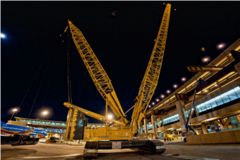 The structure of the new Sky Train transit network is taking shape at the Sky Harbor International Airport in Phoenix. When complete, the elevated rail system will transfer passengers between the airport’s busiest terminal, Terminal 4, and the Metro Light Rail station and East parking lots. Scheduled to begin operations in early of 2013, much of the overhead structure is already in place thanks to steel erection work being done by Bragg Crane Service and its Liebherr LR 1300 crawler.  In September Bragg’s Phoenix division completed the erection of the steel structure at Terminal 4. Working for Texas-based Pro Steel Erectors, Bragg used a Liebherr LR 1300 lattice boom crawler crane to lift and install more than 1,100 metric tonnes (1,200 tons) of steel.