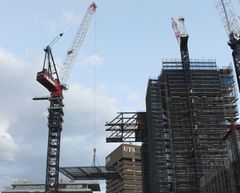 An M2480D Favco tower crane from Marr Contracting in Australia has been used to lift what is likely to be the highest and heaviest load into a fully functional CBD site, writes Brent Stacey.

The complex lift was a 96 tonne prefabricated steel roof section that will form the main structural component of a cantilevered heliostat (roof mounted architectural feature) on a Sydney high rise building.

The 45 x 45 metre section was lifted, at 32 m radius, 100 m into the air, slewed through 200 degrees, and placed at 38 m radius atop the building, One Central Park. The M2480D is one of 10 in the world, all owned by Marr. It is the largest model of luffing jib tower crane available. The other nine are all out working on major resources projects throughout Australia, Simon Marr told IC.

Look on www.khl.com and in future issues of IC for more on this project.

Closing the sale – the definitive answers you won’t like.