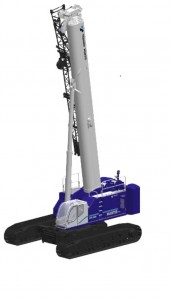 Tadano Mantis will show off at ConExpo the largest capacity telecrawler in its product range, the new 130-ton capacity GTC-1200

Tadano Mantis is putting the final touches on a new 130-ton capacity telescopic crawler crane that will be shown for the first time at ConExpo 2014 in Las Vegas. The new GTC‐1200 will be the largest capacity crawler in the Tadano Mantis product range and “represents the first blank sheet design since Mantis was acquired by Tadano in 2008,” according to Ed Hisrich, vice president, sales and customer support.

“By utilizing the global synergies among the Tadano Group Companies to bring this new design to completion, we are bringing forth the best and strongest crane we have ever introduced,” he said. “The concept behind the development of the GTC‐1200 was to design and build a telescopic boom crawler crane that met the requirements of the growing Tadano Mantis core markets of power transmission, bridge and civil, and foundation construction while expanding the broader appeal of the crane toward lift crane based markets.”

While the crane design was managed by the Tadano Mantis engineering team in Franklin, TN, the GTC-1200 is a collaboration of the engineering teams of Tadano LTD and Tadano Faun Gmbh. It utilizes the strengths of each group while maintaining Tadano Mantis’s core competencies, the company said.

The model GTC-1200 represents a step forward in design for Tadano Mantis, including a full power round boom with two extension modes, HELLO‐NET telematics, the Tadano AML‐C load moment system, and integration of hydraulic cylinders, winches, and jib systems from the other Tadano Group companies.