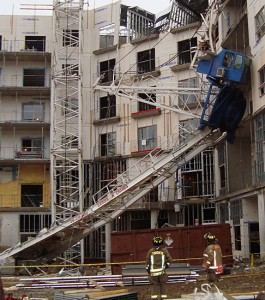 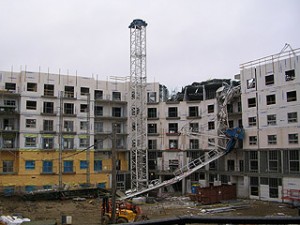 Toronto Canada. A PECCO (Peiner Electric Crane Company formerly out of Millwood NY) 355 or 225 has collapsed. The operator has survived with some bleeding from his head but it is reported that he is not seriously injured. The crane collapsed onto the new construction of a 6 story building that it was helping construct. There were no other reported injuries. The crane failed in the turntable. Not unlike the New York collapse of the Kodiak tower crane, we have a crane approaching 30 years old still in use, that failed in the turntable. There are a litany of problems that can cause this.

There are sometimes up to 100 bolts that hold that turntable together. If they are not maintained, rust will accumulate. They do need to be periodically replaced. Cranes this old need to be torn down on a regular basis for through inspections.

Rotec or Rubella Bearings need to be disassembled and inspected regularly. Beyond regular wear and tear that can destroy the bearing, cranes get struck by lightning. The resulting electrical surge can arc across bearings and lead them to premature wear.

Metals bend and flex when put under stress. The ductility of the steel and the loads induced determine how much. after 30 years of use, microcracking can result. The cracks in this form are not noticeable and grow over time to the point of failure. All cranes have a useful life span.

Bearings being bought from companies that sell them cheap, may not be making a sound product. If a bearing isn’t machined precisely, of the correct grade of steel, and hardened to exacting standards, this may be the result. The question of should I use a $15,000 bearing or a $40,000 bearing should never become a factor. The proper question is, is the bearing made well by a reputable company.

I was erecting a crane (PECCO 2000) that had a bearing not machined properly. As a result, we could not get the crane to spin because the bearing was simply too tight. Once we got it to spin, the operator got scared and stopped immediately. The bearing was so tight that the crane stopped slewing immediately as well. We were erecting the crane and only had the counter jib on. The counter jib bounced back and forth in a torquing motion for ten minutes while we discussed it. end result was that it was a cheap and poorly made bearing. We tore the crane down and started over. There was no savings and it’s one of those times where I wasn’t sure if I was going to survive what was happening. At least it was on December 23rd so the impact on our families wouldn’t have been too much to bear.

I’m standing on a soap box here. If your crane is over 25 years old, stop using it. There are a number of variables that can lead to failure. In this particular crane, you have pendants that have been exposed to the weather for 30 years. What does the core of that cable look like? The outer pendant is 3 inches in diameter and as a result, you’ll never be able to inspect that core. They don’t have the common sense safety systems such as auto zeroing of the controls. you have to put the control into neutral. I would always look and the sheaves on a PECCO just to be sure everything stopped. In the dark it was simply ugly. The use of these cranes makes sense in business because they are paid for. The risk factors out the profits from a whole fleet of them. Insurance internationally for cranes has gone insane, and it’s these old cranes that we have to thank. Go through my blog. We can’t fix stupid, but we can certainly fix the structural problems and old design problems.

This operator was lucky. Canada has a great inspection system. But we can’t be running these very old cranes. A couple of years ago I saw some old Lindens and Krolls from the 60’s up and running in Victoria. I know it feels like a waste, but they have to go.

Update: Additional reports coming in are pointing to a Loadline failure. This would cause a shock load and the eventual failure.