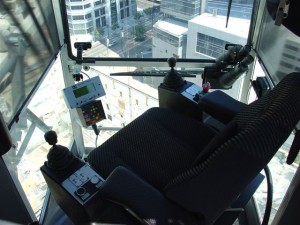 The July 6th Liverpool tower crane collapse operator survived. A report is out from the BBC about his condition. Iain Gilham paralyzed from the waist down after having been thrown out of the crane as it was collapsing. Since then he’s missed his daughters wedding and the death of his mother. He speaks on the BBC link on a video about the accident.

It’s surprising to see how many tower crane operators survive tower crane collapses. Some of the cranes are designed in a way that survivability in a collapse is surprisingly possible. The larger Liebherr’s cab is built as a part of the structure. The operator sits in the center of the structure. As a result if the impact isn’t great enough to cause extensive internal damage such as tearing the aorta, they may survive. Penetrations into the cab would be the other large concern.

When I was an operator, collapse was a thought that would go through my head, along with the question of what would I do. Of course the answer of swinging the crane, running out, getting into the right spot, all would go out the window as it would happen too fast. Iain Gilham being in a Wolff (Wolff’s are no longer distributed in the US so I haven’t seen one newer than a 1986 model) the seats aren’t designed in a way that would aid you in a accident. Why would you design seat for that? It would be assumed that you’d die in a collapse anyway. But that’s not what we are seeing. In my blog alone I can think of a half dozen accidents where operators died that may have lived if they were secured in their seats. Iain may not be paralyzed if he would have been secure in his seat.

I want to suggest that maybe it’s time to consider designing seats in a manner that would aid survivability in the event of a collapse. Seat belts just on the lap would add to this survivability. The operators wouldn’t be flung out doors and windows and as a result dying from secondary injuries. We all know that most operators would never use them. In some cases in working close to the tower the operators stand up to see straight down. They would have to unbuckle anyway. This argument doesn’t negate the value of this added safety in 90% or better of the operations. Seats could be designed with head rests to prevent neck injuries. It would simply be an option and the onus would be on the operator to use his personal protective equipment.

It seems silly to me to be able to survive the actual collapsing of the crane only to be thrown out from a height too great to survive as the crane stops falling. We as an industry should be calling for a change in this safety item. If you are the company that leased Mr. Gilham’s crane, wouldn’t you wonder why you are going to have to pay millions to settle his legitimate claim for a spinal injury when maybe he could have been 100% physically OK?