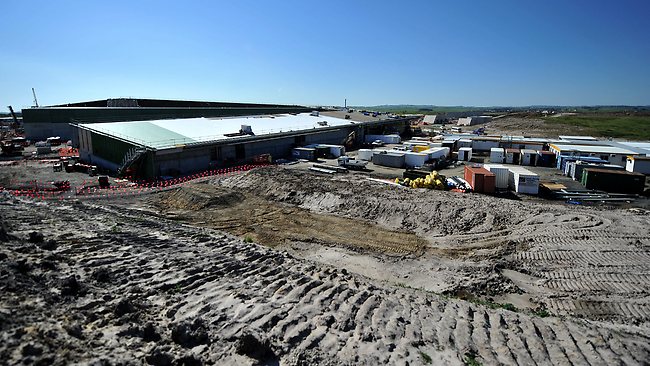 A CRACK in a crane at Victoria’s troubled desalination plant forced the evacuation of 120 workers yesterday.  The workers were sent home at 2.30pm on full pay after the fault was detected in a crane in the pumping station area of the plant.  Thiess Degremont spokeswoman Serena Middleton said the workers were evacuated for safety reasons.

“There was a crack detected in a weld on one of the tower cranes – 120 workers were sent home because there were no alternative duties for them,” she said.  The scare comes as Electrical Trades Union members claimed Thiess Degremont had mismanaged the project.

Workers said they wait for up to three weeks for tools from the plant’s storeroom that could have been bought at Bunnings.  Jobs that should take 10 minutes have been delayed for up to two days while workers wait for a crane to deliver parts to the right section of the job.

Workers also claimed electrical wiring was delayed for almost three months after a tray supporting cables collapsed, according to statements to a Fair Work Australia hearing.  ETU secretary Dean Mighell said management mistakes were frustrating workers.  “This is the worst managed job I have seen in 24 years as a union official,” he said.

Ms Middleton said some workers had failed to meet basic productivity standards, which led the company to sack 160 electricians. “This has been met with resistance and there has been some attempt to point the finger at management, which we do not accept,” she said.