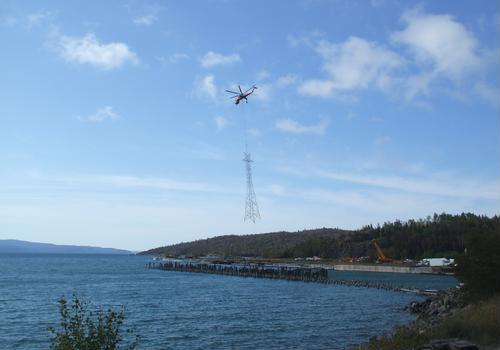 The new transmission tower, built on the commercial dock owned by Superior Aggregates in Michipicoten Harbour, has been given a three-kilometer lift into Dore Lake, where high winds recently toppled the former tower, vital for power from Ontario to Manitoba.  A skycrane helicopter, used to replace cranes in hard-to-reach areas, was flown in from the West Coast. It has a capacity to lift 20,000 pounds.

While the skycrane hovered, a crew on the ground crane at tower height secured the hook and straps in place. The tower was lifted and was out of site in a matter of minutes, setting it in place on its base in the rough terrain.

A temporary tower, carried in piece by piece and put together on site in the remote area only accessible by helicopters and ATVs, was carried out by the skycrane on a return flight.

The 24-person crew worked 16-hour days to replace the fallen tower and get the system back up and running to sustain the Ontario grid system.

Caul confirmed the new tower weighed 14,000 pounds, although previous estimates rang in at 17,000.

Caul pegged the cost of the operation at “probably” more than $1 million.”

Engineer Derrick Michaud said the aircrane doesn’t travel in the dark or in fog, but navigates in rain. Wind is factored according to the lift and location.

Caul said Michipicoten First Nation, owners of the land on which the tower toppled, Superior Aggregates and the Municipality of Wawa, were all “good” to deal with, Cault said.

“It’s always exciting,” he said of the completed operation.

The social media BOOM is here and you’re a bust!