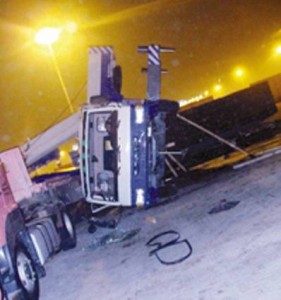 A crane operator died in Bahrain yesterday while trying to escape from his mobile crane as it tipped over. The accident occurred at the APM terminal at the Khalifa bin Salman Port.

The 34 year-old operator was employed by APM Terminals and was loading steel sheets on trucks at the port when the crane tipped over.