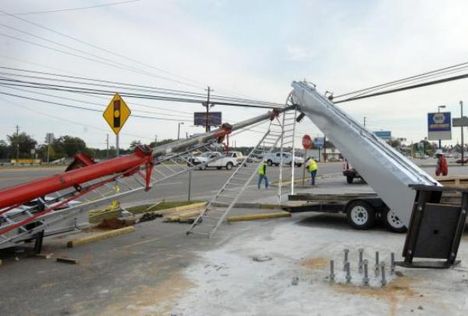 The superstructure of boom/utility truck was ripped from its truck while installing a sign support in Augusta Georgia yesterday.  The combined crane/work platform owned by Sign Care Carolina was placing the heavy steel base for a new billboard on a used car lot when the crane’s superstructure broke free from its mounting.  The crane’s boom, a tubular with a suspended work platform on the end and a fitted ladder, a type popular in the USA with sign companies, fell along with the sign pedestal it was lifting, fell over onto some overhead wires which actually managed to prevent them from hitting the ground.  No one was injured in the incident and Georgia Power was able to remove the crane boom and sign pedestal within an hour or so.  So far there has been no information or speculation on what may have caused the failure.