An All Terrain crane overturned onto a railway track in Portgower, northern Scotland yesterday closing the A9 road and the east coast railway for much of the day.

It is hard to understand what exactly happened, the four axle crane appears to have either pulled over on the A-9 – the main road along the east coast of Scotland – and the ground gave way, or the driver lost control causing the crane to crash through the fence and roll on the railway embankment. 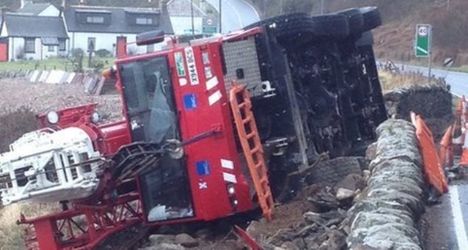 At that point the road closely follows the railway which was closed for most of the day cutting of rail travel to Wick, the last town before John O’Groats on the north east tip of Scotland.

Rescue crews were hoping to have recovered the crane by midnight Sunday in time for the railway line to open on Monday morning.