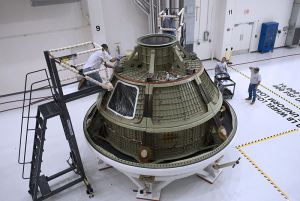 From manufacture to completion, a space transport vehicle is made to launch and orbit, never to fall. One of these would be a billion-dollar space capsule weighing 10 tons.

The Orion Multi-Purpose Crew Vehicle (MPCV) is the latest hope of the U.S. space program for sending humans beyond Earth orbit and onto destinations far, far away. Since the retirement of its space shuttle fleet, the Orion is NASA’s only crewed space vehicle under a recent revamp of the program’s long-range plans, called the NASA Authorization Act of 2010. The new strategy is to use the Orion Crew Module (or capsule), being built for NASA by Lockheed Martin Corp., and the Service Module, under development by EADS Astrium for the European Space Agency, to send crews of four to six astronauts on missions to orbit the Moon, explore nearby asteroids, and ultimately travel into orbit around Mars.

NASA has scheduled the first flight of the Orion, called Exploration Flight Test 1, for sometime in 2014 aboard a Delta IV Heavy rocket system. This will be an unmanned shake-out run to test the Crew Module’s avionics, heat shielding, and parachutes over two Earth orbits and a high-energy reentry in the Pacific Ocean.

To work on the capsule (and eventually assemble the Orion and the Delta IV for launch), NASA is using American Crane’s 25-ton ACECO custom crane (referred to as the “Orion Crane”). American Crane located in Douglassville, PA, has extensive experience in material handling equipment for Aerospace applications.

Officially, the Operations and Checkout Building’s (O&C) Low Bay Crane is used by Lockheed Martin personnel to move the Orion around the facility at the Kennedy Space Center (KSC), in Cape Canaveral, Fla. Lockheed Martin moves the capsule through several workstations along the crane’s runway during final assembly, testing, and preparation for spaceflight. American’s “Orion Crane” will also mate the Orion capsule to the Delta IV’s second stage, inside the O&C, and place this assembly on its trailer for transport to the launch pad.

In the future, the “Orion Crane” will mate the Crew Module to the Service Module and then lift that assembly onto the transport. ACECO is currently building another critical lift crane for the Orion project. Lockheed Martin will move the existing O&C Low Bay Crane to the O&C’s receiving room to lift the Orion capsule off of the transport from their manufacturing plant. Our new crane will then be installed in the Low Bay of the O&C and become the new O&C Low Bay Crane. It is a 30-ton capacity crane which is scheduled to be installed in May 2014 at Kennedy Space Center. American Crane is proud to be a part of the team to first lift the Orion spacecraft off the ground.

Photo (courtesy NASA): The Orion ground-test vehicle on a work stand in the Operations and Checkout Facility at the Kennedy Space Center in Florida.

Article by Beth at American Crane.