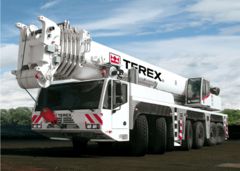 It has taken delivery of three new Terex AC300/6 wheeled telescopic mobile cranes with the fourth to follow at the end of January. One is in the colours of Scotland-based James Jack Lifting Services, acquired by Ainscough in early 2008. Application will focus on oil & gas and wind turbine work.

Features of the AC300/6 highlighted by Ainscough include Superlift, a compact (16.7 m) carrier and the 64 metre boom. A luffing fly jib up to 72 m can be added to give a 125.7 m class leading total system length, Ainscough continued.