Kobelco Cranes has started production of its new S series crawler cranes aimed at markets outside of Japan, Europe and North America. 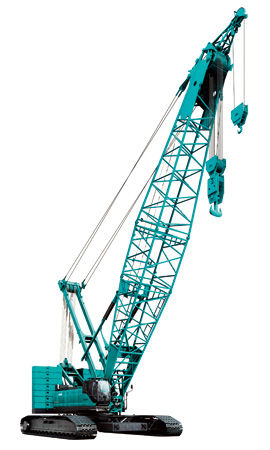 More technical details are to be made available over the next few weeks, but we understand that the main differences between the CKE G series and S series include the undercarriage design, engine and operator controls.

“The CKS cranes uses a traditional crawler crane undercarriage whereas the 60, 80 and 90 tonne G series machines have an excavator-type chain link track system with either flat or triple grouser pads,” said Jos Verhulst, sales and marketing manager of Kobelco Cranes Europe. “Also the S series machines use long levers rather than joystick controls of the G series and are fitted with a different engine.”

Common to both G and S ranges is Kobelco’s G-Mode energy-saving software. The S series also benefits from a redesign of several main components in order to make the cranes easier to transport, including an overall width of 2.99 metres and a lighter main body (no more than 45 tonnes).

An optional safety device indicates the exact amount of counterweight, slew angle and ground level sensor – all of which are displayed on a monitor in the newly designed operator cab. An improved counterweight self-installation mechanism can cope with counterweights from 80 to 110 tonnes.

The new S models can also be adapted for both bucket and lifting applications with a switchable hydraulic circuit set to either dual-pump or single-pump flow.

Kobelco says the new S series machines have a similar price and performance to its G series cranes and that they should prove popular in the Middle East and South East Asia.