Tinkerbell the world’s largest capacity heavy lift tower crane has swung into action at Sydney’s $2 billion Central Park development, the first time the behemoth has been used in a CBD development.

The crane is usually put to use on large-scale mining or civil engineering projects. 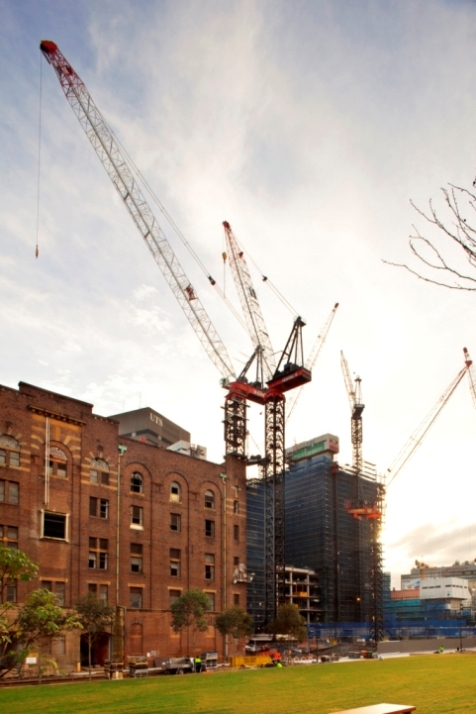 The crane, which can lift some 330 tonnes, has been erected by Marrs Contracting for Watpac and joint venture partners, Frasers Property and Sekisui House, has begun work at Australia’s largest urban renewal site, the $2 billion mixed-use development in Sydney’s Chippendale

‘Tinkerbell’ (the Favelle FAVCO M2480D crane) is the largest capacity tower crane in the world and is commissioned to work on only the largest construction projects globally. The crane is owned by Sydney-based crane hire company, Marr Contracting and has been used in Qatar in the Middle East, as well as on some of Australia’s largest mining and LNG projects including the $43 billion Chevron Gorgon project, Rio Tinto Iron Ore projects and BHP Coal projects across Australia.

For Central Park’s purposes, its main task will be to lift a 110-tonne heliostat reflector framework – about the weight of 18 elephants or 55 cars – in one single lift, some 100 metres from ground level to position at level 29 off the façade of the Jean-Nouvel designed ‘One Central Park’ East tower.

The reflector mirrors will be attached to a cantilevered steel structure extending 42m from the west face of One Central Park’s east tower. It measures 24m in width by 28m length and 1.5m in height.

The sophisticated light reflecting feature will be Australia’s first heliostat to be incorporated into the architectural design of a high-rise residential tower.

In another first, this will be the largest-spanned cantilevered structure ever to be built off a high-rise residential development in Australia.

To support the weight of the cantilevered structure, four 90-tonne steel trusses will be erected and positioned across the floor plate of level 29 of One Central Park East. Each truss measures 46m in length – 18m of which is extended from the facade of the building.

The steel trusses have been designed by Sydney-based structural engineering company, Robert Bird Group, and fabricated by Samaras Group, based in Adelaide.

“Frasers Property and our joint venture partner Sekisui House, together with our builder, Watpac, are excited to be embarking on this monumental feat.

“Installing ‘Tinkerbell’ is a key moment in a complex performance of construction and engineering expertise which will reach its finale in October this year, when the 110 tonne reflector frame is lifted onto One Central Park.

“Jean Nouvel’s design for One Central Park is truly visionary. Today we’re gaining an insight into the complex engineering and world-class construction which will bring the signature element of this building to life.”