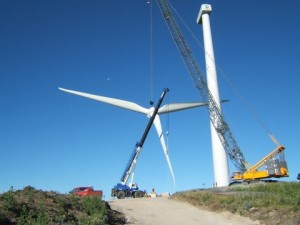 The promise of heavier lifts at petrochemical, nuclear and renewable energy sites is driving the demand for crawlers, even in this difficult economic period.

In September Manitowoc’s 2,300 tonne capacity Model 31000 quad track crawler crane was shown in the iron for the first time, while the biggest to date is the 3,200 tonne capacity Terex Demag CC8800-1 Twin, launched at the end of 2007. Liebherr has a 3,000 tonne capacity model in development. Initially known as the XXL, it is now designated LR 13000. It will have a maximum load moment rating of 50,000 tonne-metres.

The questions is, how big can crawlers get? ABG Cranes in India is discussing the possibility of a 3,000 to 5,000 tonne crane to erect vessels in a series of new nuclear power plants in the country.

The US/India 123 Agreement will result in 30 – 40,000 MW of newly installed nuclear energy output once statutory safeguards are put in place, says Saket Agarwal, managing director of ABG Cranes’ parent company ABG heavy Industries. As a result, the company is in preliminary talks with Terex Demag, it says, concerning the new lifting device to tackle heavy loads at long radius.

Options include a crawler crane, explains Agarwal. “It is not yet decided. We could go for a ring crane. It depends on how much demand is there. If there are a number of projects coming together, then we might go for the more flexible [crawler] solution but, if there are only one or two projects, then we would go for a ringer arrangement.”

In Europe, only two manufacturers, Terex and Liebherr, are showing interest in producing such a giant, of any crane type, says Agarwal. Wolfgang Beringer at Liebherr-Werk Ehingen, however, believes crawlers up to 5,000 tonnes capacity would be an unlikely development in the near future.

“For conventional crawler cranes – ones that can drive with a load – we presently do not see this happening. The problem for larger cranes would be the economic efficiency due to the small number produced. For these special lifts, stationary lifting solutions are available, like ring lifters.”

Major manufacturers will continue to push the boundaries of design and capacity, but there is always the need to develop lower capacity ranges. Telescopic crawlers are an example. They appear to have gained more prominence in recent months with a number of new products. One reason is that manufacturers see them fitting into a wide range of applications.

Link-Belt launched its TCC750 telescopic crawler crane at the SED construction show in the UK in May. It was then unveiled for the first in the USA at the company’s Cranefest ’09 event in September.

Pat Collins, Link-Belt lattice boom product manager, says, “The great thing about tele-crawlers is it goes into a lot of niche contractors. General construction is slow right now but if you go to the foundation companies, they have interest – it is really good for picking and rolling and picking and carrying when they tilt up the cages to go into the holes. With wind energy, it can track with a load and tail a blade, or some of the things they are tilting up.”

Another example of expansion at the lower capacity level comes from ABG Cranes. It realized the demand for domestically produced crawlers with the construction of a new factory in Mumbai. The first model off the production line is the 80 tonne capacity 1080 hydraulic.

According to ABG Cranes managing director Gopal Datt Dobhal, the company designed and developed the crane itself. It offers a 13 – 58 m lattice boom and a 9 – 18 m fixed jib. The boom hoist operates at 52 m/min, while the main hook hoist works at a single line speed of 97 m/min. Power is provided by a Caterpillar 3306B Engine with rated capacity of 242 kW at 2,000 min-1.

At the time of writing in September two units had been manufactured at the facility, which has the capability to produce 100 units a year, up to 250 tonnes capacity. It is hoped 10 units of the 80 tonne 1080 crawler will have been built by March 2010. Agarwal believes that he will be able to rival the corresponding Chinese imports and claims that his machines rival those manufactured in the West. “The service from Chinese manufacturers is very poor, with language and quality being a problem. So far there is no Indian manufacturer of hydraulic crawler cranes, so it was necessary to have a facility here. It means end users can easily get service and parts.”

The availability of adequate after sales service from Chinese manufacturers is an issue being addressed. Zoomlion, for example, announced at the Intermat show in Paris that it was setting up a Europe-wide service network. Competition from Chinese-made crawler cranes is not lost on Western manufacturers.

As Mike Wood, Manitowoc’s global product manager, explains, 2008 saw huge demand for crawlers that Western manufacturers could not support. “That is where the Chinese made inroads. They had product available for end users. Now that the market has weakened, I believe that they continue to have a degree of success but not nearly what they were having before. However, they certainly are manufacturers that we will have to deal with. This may sound harsh, but they are an up and coming factor in the market place.”

Wood believes, however, the relatively low cost of Chinese cranes will not continue if the service provision is increased. “The processes that [Chinese] manufacturers will use to develop and maintain their products will ultimately increase their costs and that will be translated into price.”

Chinese manufacturers are certainly busy throughout the capacity range. In the second quarter of this year Zoomlion released details of its new 1,000 tonne capacity crawler crane. The first QUY1000 is undergoing testing and will be delivered to Shanghai Construction Company at the end of 2009. It will be used to help build a nuclear power station. According to Zoomlion, a contract has been signed to produce a second unit. In standard boom configuration the QUY1000”s lifting capacity is 800 tonnes at 7 m radius and maximum boom length is 108 m. With superlift the capacity rises to 1,000 tonnes at 14 m.

Sany is also busy with new 650 and 100 tonne capacity crawler cranes, both due to be launched by the end of this year. The 650 tonne SCC6500WE will initially be aimed at the Chinese market but exports may follow in the next three years. Zhu Wenkui, Sany Science and Technology international sales director, said the SCC6500WE was designed primarily for the erection of 3 MW wind turbines. “We want to sell to the Chinese domestic market. Once our product and technique is perfect then we will look to the export market,” added Wenkui. The model is an addition to the range topped out by the 1,000 tonne capacity crawler launched at Bauma China, in November 2008.

In contrast, the 100 tonne capacity heavy duty SCC1000HD crawler will be aimed at export markets across the world immediately, ranging from Europe to South East Asia.

According to James Equipment, which became Sany’s exclusive dealer in Australia in 2006, the country is an example of how Western states are welcoming Chinese products.

“With the Australian government at both Federal and state levels heavily engaged in infrastructure projects, not to mention the ramping up of the resources sector particularly in gas and green energy projects, 2010 could well be the start of a very busy and demanding period,” says Malcolm Pfrunder, general manager. “In seeking out the green shoots we see that many of the new projects in the planning stages will require crawler type cranes.”

The current export market for Chinese manufacturers evidently holds more opportunities than for Western manufacturers selling into China. Mike Wood at Manitowoc says the company is well placed with its offices in the country, but adds, “With the economy right now, everyone is fighting over the same bone, so it is very difficult to fight against the same players, particularly the Chinese. We try to maintain our margins to hold our resale value and are having reasonable success, even with those constraints.”

Pat Collins, at Link-Belt, has the same experience. “The telescopic truck market and crawlers has slowed down and end users make the decision not to buy and are budgeting more repair dollars. Our parts business has not really dropped off, and we review that monthly. So, if everything goes down in a down period and your parts business maintains, then really that’s a positive.”

Collins adds that the busiest sectors in the USA include the Gulf coast and Midwest, with wind, petrochemical and coal-fired power sectors being active. “I would generally say the hotter areas are the same as in the good times. The wind business has bounced back a little and in June saw activity pick up, but it has not reached what it was a year ago.”

These applications are well suited to Link-Belt’s 500 tonne capacity crawler crane, the 548, which was launched at the ConExpo show in Las Vegas in 2008. The first unit has just been assembled in Texas and, at the time of writing in mid-September, was about to be delivered to a customer in Kansas, Okalahoma. “This is the first to be sold, and for the market that we are in right now it has a lot of interest.”

Collins adds the model will to go to work in power plants and the energy field. Link-Belt is testing an offset top, suited to the wind energy sector, while a 600 US ton superlift version of the 548 is going through final testing in Siajo, Japan.

The company has no immediate plans to develop giant crawlers like Manitowoc’s Model 31000. “The 550 speaks for itself, but we will look at the gap between the 550 and the 300 tonne next.”

Another model suited to power-based applications in the 550 tonne range is the 600 tonne capacity LR 1600/2 lattice boom crawler from Liebherr. It was launched last year but was the largest crane on show at Intermat where it was in the colours of Usabiaga from Spain.

Testament to the relative strength of large capacity crawlers in today’s market is a range of orders this year from the UK’s largest crane rental company, Ainscough Crane Hire Ltd. It includes six heavy lift lattice boom crawler cranes between 500 and 1,250 tonnes lifting capacity from Liebherr and Terex Demag. “We feel that the demand for heavy crawler cranes is really taking off, particularly in light of the demand from the energy sector – wind farms, power stations and the major related infrastructure projects.” explains Neil Partridge, Ainscough chief executive.

This optimism is only partly shared by Mike Maruo, Kobelco Cranes director of internationasl sales, who summed up the company’s feelings about the global situaton. “We do not see any recovery move anywhere in the world yet. However, we see some stable demand in India which may stay for some years. The only worry is that there might be used cranes coming in from other countries.

“Another stable market is China. However, the market for foreign suppliers like us, is not that enjoyable because of import duties and local manufacturers’ growth. So the country is a minor market for us now.”

Maruo adds, “In Hong Kong, many big projects are scheduled where they will need cranes. So there will be some growth in the country, but we cannot expect much in quantity. There are certainly positive signs. But our general feeling is that the market will still be down or drop in 2010 as a whole. Next year will be a tough year.”