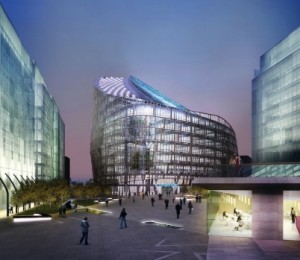 Three tower cranes will be erected at the building site for the Co-operative Group’s new headquarters by the end of August, the insurance-to-retail giant said as it confirmed financial close with BAM as lead contractor. Site clearance work has been going on for several months at the site of the £100m, 325,000 sq ft office building on the northern edge of Manchester city centre.