A tree worker fell around 23 metres from a crane yesterday in Bremerton to the west of Seattle Washington.

Aaron Bjorn Waag, 28, was apparently suspended from the hook of an All Terrain crane via some sort of harness. He was trimming tree limbs when the harness gave way dropping him to the concrete walkway below.

The emergency services arrived and paramedics gave Waag emergency first aid at the scene, before rushing him to hospital where he was pronounced dead on arrival.

Initial reports from the scene suggest that he had attached his regular climbing harness to the cranes hook while on the ground and had the operator lift him into position. The harness may have become detached rather than failed.

Waag was working for his family company – Waag Tree Service of Poulsbo. 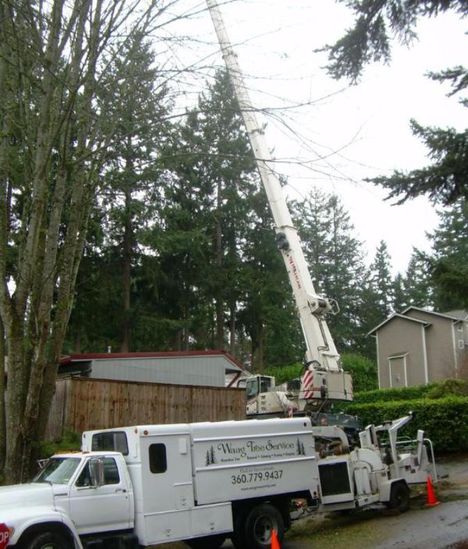 This is an utterly tragic and avoidable accident, why this team used this form of access is hard to understand, although it looks as though the site is tight, the trees large and the crane was probably required to lift down tree limbs. It may have been too tempting a short cut to the top of the tree?

There are still a large number of arborists who seem to think that using aerial lifts to trim trees is not what real men do. To be fair to the guys in this accident, the terrain they are used to work from is often heavily wooded private yards in rocky coastal areas with very large trees, which can be hard to reach with most forms of powered access. As a result they are forced to do a lot of climbing.

In many cases though a large/mid-sized truck mount, spider lift or boom truck can be used, either close in or standing in the street. Platforms can also be attached to the crane’s boom nose or hook – but this does of course require planning.

There are still way too many accidents in the tree sector many of which could be avoided with the use of appropriate powered access.