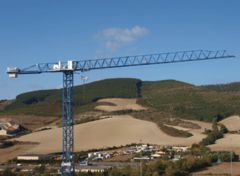 The LC1600 series has been designed with modularity and easiness of assembly and transport in mind. The 8 to 12 tonne capacity series sits between the existing 5 to 8 tonne LC1100 and 12 to 48 tonne LC2100 series’.

“In addition, the LC1600 family unites the advantages of both series, which share numerous elements,” said a company spokesman.

Following the launch, two existing models from the LC2100 series: the 21 LC 170 and 21 LC 210, will be dropped from the manufacturer’s range. They have very similar characteristics to the new models in terms of jib length and load capacity, said the company.

The LC1600 also shares the 2 m wide tower sections, climbing cage and the 4.5 and 6 m wide cross bases with the LC2100 series. With a transition section, the LC1600 cranes can be erected on 2.5 m-wide tower sections to obtain freestanding heights of more than 100 m, said the company.

“One of the design advantages of the series is that the cranes don’t have an apex element, in the strictest sense. The first counterjib section is placed on the gyratory part and, once mounted, the first jib section joins in at one end and the rest of the counterjib at the other,” added the spokesman.