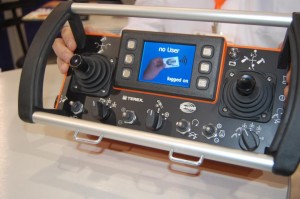 Recently introduced the Spectrum D radio controller featuring a 3.5-inch color screen— a new feature now offered on radio remote controls used for operating a variety of cranes, such as knuckleboom cranes or overhead cranes. As an option, the protective roll-over bar can be lit with LED’s to allow the operator to clearly read and locate functions in limited lighting conditions.

The screen can be designed to display a variety of information in graphical or image format. Depending on the features desired by the OEM, this might include wind speed data, load weight, and radius. “The goal would be to mimic the screen in the cab of the crane by tying into the LMI system,” said Brett Schneider, regional sales manager for HBC-radiomatic. Display navigation of the screen can be customized using six push buttons and the Radiomatic iCON navigation system.

Controllers include two analog or stepped joysticks or eight linear levers, or a combination of the two. Making use of a new user identification login-card called the HBC Smart Card, the control is protected from unauthorized use. The Smart Card can have different user levels, based on operator experience and expertise and is tagged to a specific control unit. The Smart Card can also work in combination with a datalogger, collecting operational data for each user. That information can then be analyzed by the owner in order to improve productivity, to assist with service issues, or in accident analysis, explained Schneider.

In addition, the device includes a number of new safety features. A vibration alarm is standard for battery life indication, but can also notify the operator about critical statuses, faults, and potential dangers. Other settings can be customized according to the application. Another new option is a speed limit micro drive function, which limits full speed operation even if the joystick or linear lever is fully activated, which is key during tight, critical lifts.