Two loads dropped in a week 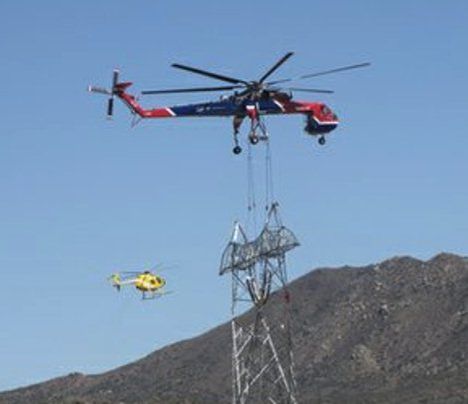 We normally don’t cover big helicopters that are used to lift loads in difficult to reach locations, but if the past week is anything to go by they seem to be more prone to accidents than land based cranes.

This week one machine has dropped two seven tonne transmission towers alone. Early on Tuesday morning the Sun Bird Erickson air crane helicopter placing a tower close to a highway near San Diego in California, dropped a the load from a height of more than 70 metres. We understand that the highway was closed for the lift and no one was injured.

The helicopter was grounded while an investigation ensued, it turned out that a short circuit in the remote controlled hooks caused them to release the load.

The helicopter, which was contracted to San Diego Gas & Electric (SDG&E) was worked on by Erickson technicians throughout Wednesday and Thursday, they then approved the Sun Bird to resume lifting on Thursday.

On Friday while lifting another seven tonne tower three of the four hooks released leaving the tower dangling precariously from the fourth hook, the crew managed to lower it to the ground and disengage the last hook, leaving the tower to fall over.

SDG&E would not say if Friday’s drop was caused by a similar failure, in a statement SDG&E’ s chief executive Michael Niggli said: “These recent incidents are unacceptable, we hold ourselves and the helicopter manufacturer accountable for safe construction practices and resolve to take steps ensuring that incidents like these will not happen again.” We understand that Erikson will now send a different helicopter to the job, while the Sun Bird remains grounded.

Local residents who are objecting to the power line installation claim that the utility is rushing the job in order to get as much of the tower installation work completed as possible before a hearing on the project on June 21st. They also say that the helicopters carry loads near to populated areas and should therefore be grounded until the manufacturer can guarantee that the problem is solved.

The Erickson Air Crane is based on the Sikorsky S-64 Sky Crane, launched in 1962, the rights of which were acquired by Erickson in 1992. The aircraft has proven to be an admirable performer in fighting forest fires, for which it is exceptionally well suited. It has a maximum lift capacity of 9,000kg Erickson operates a fleet of 17 all of which are equipped for fire fighting and lifting duties.

Helicopter cranes are outside of our area of expertise, but this ‘incident’ is incredulous on two fronts. 1. That after such a serious near miss, not to mention the cost resulting from the damage to the dropped load, an almost identical accident occurred just three days later on the same project.

And 2. That it could happen in the first place. Ground based cranes that use automatic hooks are usually required to have back-up or redundant systems. The hooks cannot usually release a load when they have weight on them, due to a positive mechanical interlock.