Liebherr has issued a statement this morning on the incident at the end of November at the Itaquerao Stadium in São Paulo, in which a 1,350 tonne capacity LR 11350 crawler crane collapsed killing two site workers -see :Fatal crane collapse at Sao Paulo World Cup stadium.

The statement says that all investigations conducted to date by Liebherr – including those at the accident site – have shown that the LR 11350 crane had no technical defects. It concludes that the ground was unsuitable and unable to carry the weight of the crane and the suspended load. 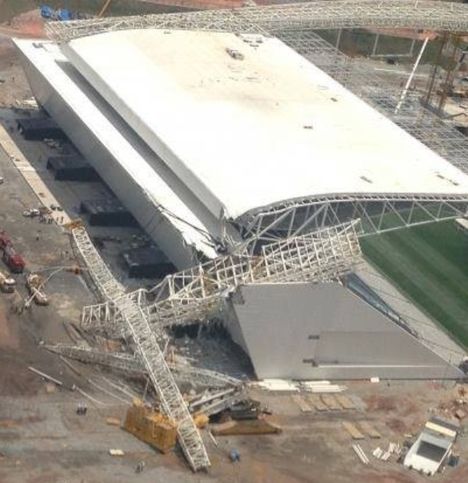 An overview of the scene shortly after the incident occurred

Because of this the crane sank and the excessive inclined angle caused a massive overloading of the crane and the complete collapse. Liebherr says that an independent, internationally acknowledged crane expert has also come to the same conclusions.

The company says the cause of the accident can be confirmed by subsequent static-load calculations and it assumes that all the reports currently being prepared about the accident will reach a similar conclusion. Analysis of the data logger by Liebherr has shown that it had not been recording data since November 2012 although it points out that the data logger cannot influence the crane functions.

In conclusion it says: “Liebherr is extremely saddened by this tragic accident and the two fatalities, and expresses its deep sympathy to their families. As the crane manufacturer Liebherr continues to do everything in its power to help bring the accident investigation to a speedy and logical conclusion and expects the parties directly involved in the accident to do the same. Liebherr will also continue to cooperate closely with the Brazilian authorities.” 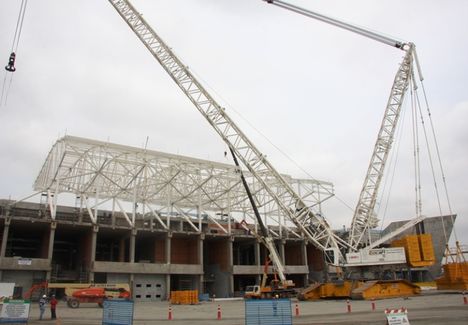 The crane at work around a year ago