Two Grove GMK7550 all-terrain cranes have been used to lift a pair of giant historical artifacts at the Smithsonian Institution in Washington, DC. 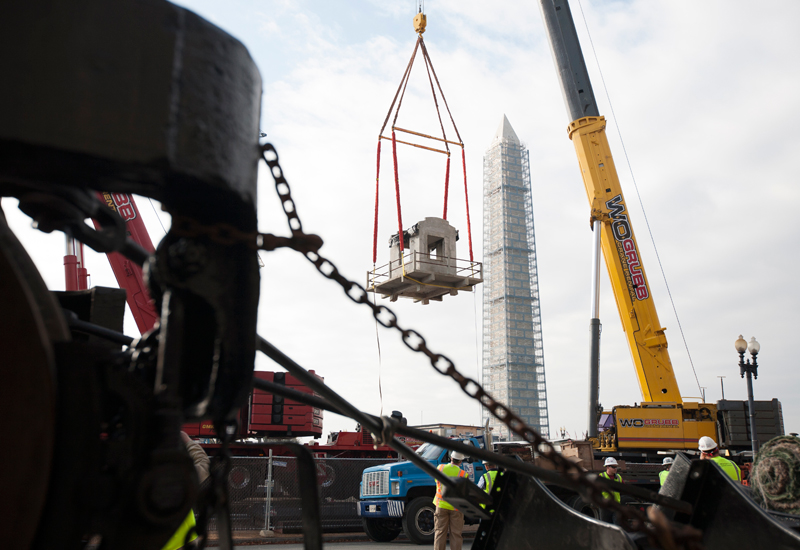 Lifting specialist WO Grubb was contracted by the Smithsonian to move the sizeable relics at its new National Museum of African American History and Culture.

First to be lifted was a 45-tonne railway car that was so large it had to be placed before construction of the museum could be completed.

“A key challenge of the project was getting the ground-bearing pressures correct for the two Grove all-terrain cranes,” said Stephen Dieren, project manager at WO Grubb.

“They were both set up approximately 60-feet (18m) from the construction pit to achieve the optimum pressures,” he added.

The lift took place on Constitution Avenue, next to the National Mall and in view of the Washington Monument. The road had to be closed to accommodate the Grove units, which moved the shrink-wrapped railway car into the construction pit. The cranes were situated on opposite sides of the 24m railway car, which was rigged with two straps on each side and 3m spreader beams.

For the second lift, a 1930s guard tower used at Louisiana State Penitentiary was lifted by a single GMK7550 unit. The artefact is made of concrete, sports a corrugated steel roof, and weighs in at approximately 16 tonnes.

Speaking after the successful completion of the lifts, Dieren commented: “Months of planning and days of prep work were put in to execute this job. Everything went beautifully.”