A large tower crane crashed into an apartment block in Kirov 1,000 miles to the east of Moscow yesterday.

The rail mounted crane was caught in strong winds which propelled it along the rails gathering speed over 100 metres before it hit the stops on the track and went over taking out the balconies on nine floors. In spite of the building being occupied there were no reports of any injuries however seven cars were badly damaged.

The crane as it went over

Local reports – uncorroborated – suggest that several other cranes were working on the site, in spite of the wind and they continues to work even after the incident.

The incident is under investigation, but it was said that the crane may not have been installed properly. 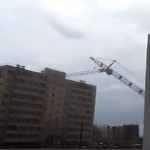 A sales tool that actually works