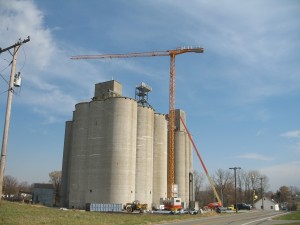 After a grain explosion in a silo, Rebsco was contracted for the rebuild. Rebsco hired Jcrane Inc. to help complete the repairs. Jcrane is an Ohio based company that has more than 25 years of experience in the crane and rigging industry. Jcrane specializes in mobile crane rentals with operators, self erecting crane rentals, and tower crane sales.

The explosion damaged part of the 120 foot silo’s structure as well as the conveyor system with-in it. From this misfortune, Jcrane had a great opportunity to build a relationship with a client. Seizing the opportunity, Jcrane provided them with the option to rent a San Marco SMT 522 for 5 months. Rebsco chose this option due to the fact that it had a 58% cost savings over the other option.

Jcrane and the San Marco SMT 522 proved to play an important role in having the job done properly. The SMT 522 was used to hold the legs of the Silo in place while they were welded into position. Since the force of the explosion was so great, it damaged the grain loading and unloading equipment, which was located at the top of the silo. Rebsco removed the damaged conveyor systems and hoisted the new equipment into the silo. The SMT 522`s remote controlled system allowed Rebsco to work very efficiently. Being able to operate the crane from within the top of the silo, the operator could move equipment into position with his own eyes, rather than by radio. The radio controlled features helped Rebsco reduce labour costs and placement mis-communications. Jcrane said, ” We were really amazed with how well the SMT 522 worked for this type of job.” Overall, the SMT 522 had numerous advantages over a mobile A/T crane and proved to be the proper piece of equipment for the job.